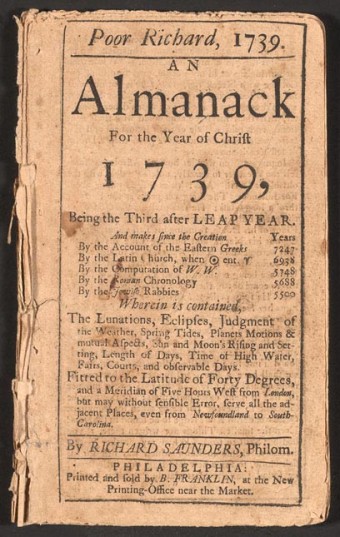 Ben Franklin was, by all accounts, a busy guy. Throughout his life, he made a name for himself as a printer, postmaster, author, scientist, satirist, inventor, diplomat and statesman. Aside from his indisputable political influence on the fledgling United States, his most memorable contribution to American culture was Poor Richard’s Almanack. Not only was his almanac popular in its own time, it has endured as a reminder of the early American traits of frugality, hard work and humor – ideals that are still relevant today.

Almanacs were among the most widely read secular books in the American colonies, and a successful one could earn a good hunk of cash. People depended on almanacs to serve as calendars, and to provide astronomical information, as well as farming and medicinal tips. Some almanacs included general information, while others even added funny anecdotes, witty sayings, wise proverbs and words of wisdom. The latter is where Poor Richard’s Almanack really shone.

On December 19, 1733, Ben Franklin began publishing Poor Richard’s Almanack under the pseudonym Richard Saunders, a “self-proclaimed penniless purveyor of prognostications.” (No-one loved a good pseudonym more than ol’ Ben. Writing under pen names was a life-long habit.) He also invented a nagging wife and a printer who “offer’d me some considerable share of the Profits” (who was of course, himself) that he often referred to in the prefaces of the almanacs.

What set Poor Richard’s Almanack apart from all the others flooding the market was his aphorisms, proverbs and verses. Franklin was the first to admit that he borrowed heavily from the “wisdom of all ages.” His real genius was paring a phrase down to its most basic form. A good example being:

Howell: The greatest Talkers are the least doers.

Ben liked to get right to the point, making his borrowed words of wisdom easy to remember, which is why we’re still repeating them to this day.

Poor Richard’s Almanack became Franklin’s most profitable business venture, second only to the Pennsylvania Gazette. By the 1740s, the almanac was being sold in the colonies from New England to the Carolinas and was generating about a third of Franklin’s income. His printing business proved so lucrative that Ben had the luxury of retiring at 42.

By 1758, Franklin was headed to England in the service of the colonies, and officially laid the Poor Richard’s Almanack to rest before his departure. The 25-year run of Poor Richard was concluded with yet another character from the fertile imagination of Ben Franklin – “a plain, clean old Man, with white Locks,” called Father Abraham. Franklin put together a compilation of maxims and proverbs from earlier editions, and remembered in his autobiography that, “The bringing all these scatter’d Counsels thus into a Focus, enabled them to make greater Impression.”

It certainly did. Father Abraham’s speech, entitled, The Way To Wealth, was published separately, and was one of the most popular publications in 19th century America. Franklin’s compilation was published in several languages and printed around the world, making Franklin a celebrity in Europe, particularly France (that would come in handy later).

Ben Franklin’s influence on American culture cannot be overstated. His proverbs and maxims have been repeated for so long and so often that they are considered as plain old Yankee common sense. In 1756, Franklin set forth his mission statement in his own words:

With a view to the Improvement of thy Mind and thy Estate, I have constantly interspers’d Moral Hints, Wise Sayings, and Maxims of Thrift, tending to impress the Benefits arising from Honesty, Sobriety, Industry and Frugality.