This Day in History: December 17th- Through the Tulips 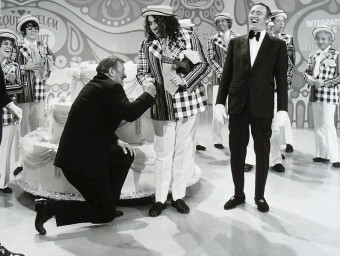 On December 17, 1969, the oddly engaging ukulele strumming pop sensation Tiny Tim, most famous for the song “Tiptoe Through the Tulips”, married his girlfriend, Miss Vicki, on the Tonight Show while 45 million people watched at home. The wedding attracted the most viewers in the show’s history up to that time.

Tim had mentioned to Johnny Carson earlier in the year that he was engaged, and Carson casually suggested that the couple marry on the Tonight Show. Tim took him up on it, and wed his 17-year-old fiancé Victoria Mae Budinger, clad in an elaborate white wedding gown, on the program.

The couple had a daughter named Tulip Victoria in 1971, but lived apart for most of their marriage. In 1979, Tim and Miss Vicki divorced. Tim would marry twice more, each time living separately from his wives in a neighboring house.

Tiny Tim, who was born as Herbert B. Khaury on April 12, 1932, got his big break on Rowen and Martin’s Laugh-In. He built a cult following thanks to his unique, some would say bizarre, style – he sang old-timey songs in a falsetto voice while playing a ukulele – which really made him stand out in the psychedelic ‘60s.

His first album in 1968 was “God Bless Tiny Tim”, a nod to Charles Dickens’ character in “A Christmas Carol”. (Aside: If you’re curious: What was Wrong with Dickens’ Tiny Tim?)  His second, a collection of children’s songs, “For All My Little Friends”, was released in 1969 and nominated for a Grammy award.

Tim was riding high as the 1970s arrived. He did appearances on the highly popular Jackie Gleason and Ed Sullivan shows, and in the summer of 1970 he performed in front of 600,000 people at the Isle of Wight Festival. But as the decade progressed, interest in the quirky entertainer waned, and the venues and paychecks got smaller and smaller.

In the fall of 1996, while Tim was performing at a ukulele festival in Montague, Massachusetts, he suffered a heart attack. He was hospitalized at the Franklin County Medical Center in nearby Greenfield, MA for three weeks until he was stabilized. Upon his release, he was cautioned not to work due to the severity of his diabetes and cardiac issues.

Disregarding the risks, Tim chose to perform for a benefit at the Woman’s Club of Minneapolis on November 30, 1996. He was forced to end the performance after his signature song “Tiptoe Through the Tulips”, and died at the Hennepin County Medical Center an hour later at the age of 64.

He was interred with his ukulele and a single tulip.