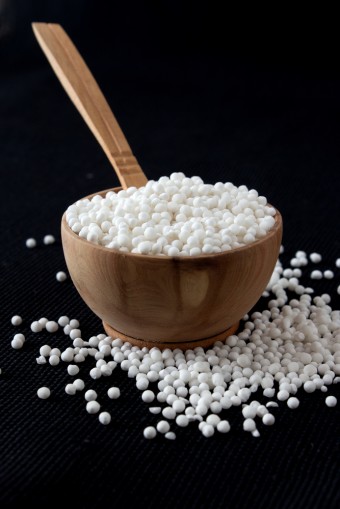 Little pearls swimming in a creamy custard flavored with vanilla or lemon, many of us have fond (and others not so fond) childhood memories of tapioca pudding. Although this staple dessert of the 1970s went out of vogue for a while, today it’s making a comeback. You may not know, however, that the tapioca we use is a refined product whose parent plant is filled with dangerous toxins that, absent proper preparation, can result in cyanide poisoning and possible death.

Cassava, the plant from which tapioca is made, was one of the first domesticated more than 12,000 years ago in South America. Migrating northward, it became a staple crop for people throughout the pre-Columbian Americas. Taken to Africa by the Portuguese, today it is the third largest source of carbohydrates in much of the world, after rice and maize.

Hardy and nutritious, cassava, also called yuca (which is distinct from the yucca plant), refers to the shrub as well as the starchy root that is harvested for food. There are different varieties of cassava, but generally they are split into two general classifications: sweet and bitter.

Although both are toxic, bitter cassava may have as much as 400 mg of cyanogenic glycosides per kilo, potentially 8 times more toxic than sweet cassava.

Cyanogenic glycosides are present in a startling number of plants cultivated for human consumption, and more than 2,000 known plants total. Not inherently toxic, cyanogenic glycosides are transformed within humans and animals after the plant tissue has been macerated, when enzymatic hydrolysis by beta-glucosidase releases hydrogen cyanide, the chemical that is toxic to people. (Cyanide poisoning works by not allowing the body to use oxygen, mainly via inhibiting the cytochrome c oxidase enzyme.  So the blood remains oxygenated after it passes through your body and back to the lungs.  Thus, it causes the body to suffocate, even though a person is otherwise breathing normally.)

There are several types of these cyanogenic glycosides, including amygdalin, dhurrin, linamarin, lotaustralin, prunasin and taxiphyllin, and they are found in some pretty common foods including, respectively, almonds, sorghum, cassava and lima beans, stone fruits (think peaches, plums, apricots and nectarines) and bamboo shoots. We don’t get sick from eating these products because either by the time they reach us, the toxins have been eliminated (e.g., blanched almonds and canned, prepared bamboo shoots), or we don’t eat the toxic part (e.g., the pit of the stone fruit where the poison precursor resides).

To prepare cassava for consumption, for the sweet variety, mere peeling and thorough cooking is all that is required. However, with the bitter variety, not only is it peeled, but the root is then grated and soaked in water for long periods to leach out the poisons. In addition, the grated bitter root is allowed to remain in water until it ferments, then it is thoroughly cooked, where this last step in the process finally releases the remainder of the dangerous compounds.

Properly processed, cassava is eaten grated, as chips, and frequently ground into flour and baked into crackers and breads. To make the pearls seen here in the U.S., the moistened starch is pressed through a sieve, and depending on the intended use (such as in pudding or in drinks) the size may be either small or large.

However, when the plant is not properly treated, cyanide poisoning can occur. Symptoms include a drop in blood pressure, rapid pulse and respiration, headache, dizziness, pain, vomiting, diarrhea, confusion and even convulsions. A lethal dose is in the range of 0.5 to 3.5 mg per kilo, with children being particularly at risk due to their small size (and big appetites).

Sometimes, relatively low doses of toxins remain in prepared cassava, such that people are unaware, at least at first, that they are consuming it. This may lead to chronic cyanide intoxication, which can result in thyroid and neurological problems, among other issues.