This Day in History: October 13th- The Almanac and the Spy 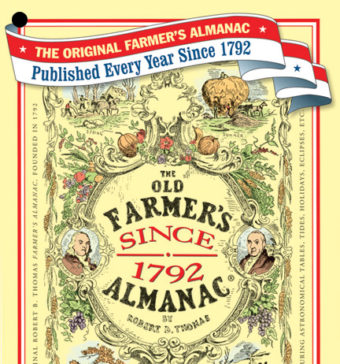 Way back on October 13, 1792, when George Washington was serving his first term as president, the first issue of what is today known as The Old Farmer’s Almanac went on sale for the asking price of six pence (nine cents). It was a big hit, tripling its circulation from 3,000 to 9,000 by the time its second issue was published.

There were many almanacs available providing the same content, such as tidal information, astronomical events and weather forecasts, so what made – and makes – The Old Farmer’s Almanac more popular than all the others?

For starters, Robert B. Thomas, the Almanac’s editor, had a secret method of weather forecasting that was (supposedly) surprisingly on the money. He devised a unique way of interpreting natural cycles that gave him an 80 percent accuracy rate, and to this day his method is locked away in a box at the Almanac office in Dublin, New Hampshire.

When Thomas died in 1846 (legend has it he was proofing the 1847 edition at the time), The Old Farmer’s Almanac was the best selling periodical in the United States. So even if the weather forecasts came up short here and there, he was definitely doing something right. (It probably helped that this particular item was not only useful for reading, but also wiping after going the old number two. At the time, toilet paper was virtually non-existent in the western world. The Almanac even helpfully came with a hole in it so it could easily be hung in outhouses. It wouldn’t be until the early 20th century that toilet paper became a thing in the United States.)

John H. Jenks, the new editor, officially added the world “Old” to the title of the Almanac in 1848 (previously it was known as The Farmer’s Almanac.) In 1851, the cover was changed to include an illustration of the four seasons by artist Henry Jenkins, which has graced every issue since.

During the late 1800s, the editors of The Old Farmer’s Almanac added features geared towards a general audience. One hapless editor dropped the weather forecast in the 1930s, but the reader backlash was so negative that the poor guy’s reputation at the magazine was shot.

Robb Sagendorph, who founded Yankee magazine four years earlier, bought The Old Farmer’s Almanac in 1939. His mission was to return the magazine to the style and format of its original editor Robert B. Thomas. The Almanac became filled with New England wit and charm once again, and its sales picked up after falling to an all-time low a few years earlier.

The Old Farmer’s Almanac record of continuous publication was threatened when a German spy was caught by the FBI – and he happened to have a copy of the Almanac in his coat pocket. The U.S. Government surmised he was using it for its weather reports, so it seemed the Almanac was indirectly supplying information to the enemy.

A nervous Sagendorph managed to convince the Feds that if the magazine published weather indications rather than forecasts, they would not be violating the “Code of Wartime Practices for the American Press.” The FBI was cool with that, so the Almanac’s perfect run continued unbroken (and does to this day). (Though it seems a lot of fuss for forecasts that, in reality, are about as accurate as flipping a coin. In fact, while this particular publication has a reputation for being one of the most accurate long term weather forecasting outlets out there, according to Dr. John Walsh, an Atmospheric Science professor at the University of Illinois, after reviewing their monthly forecast predictions over 5 years, he found The Old Farmer’s Almanac only correctly predicted deviations from normal annual averages at a rate of 50.7% accurate for monthly temperature forecasts and 51.9% for precipitation forecasts, when compared to actual weather station readings for the time periods.)