This Day in History: October 10th- The Battle That Shaped History 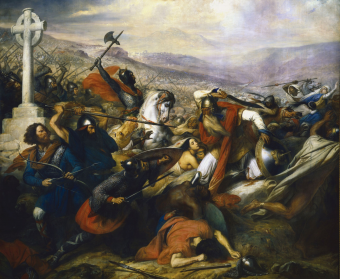 The Battles of Tours was not a war of nations, but rather a battle of civilizations between Islam and Christian Europe. The Muslims had been conquering the remains of the Roman and Persian empires and were heading toward modern day France to continue their expansion. The Frankish King Charles (“The Hammer”) Martel wasn’t about to let that happen, so he gathered his forces at Tours as Abdul Rahman Al Ghafiqi, Governor-General of Moorish Spain, led his Army northward.

The army that Charles amassed was very different from the Arab fighting forces. It was also unlike the Barbarian horde the Muslims had engaged the last time they attacked the area, and had no doubt had expected to encounter again. Previously, the only thing standing between a Frankish soldier and death was a heavy shield – they were now sporting full body armor. Their army boasted a full infantry unit that was quite a contrast to the lightly armed Arab horsemen who relied upon their speed, mobility and fearsomeness to win the field.

Martel also benefited from the element of surprise, as he knew Rahman’s position but the Moors were unaware that the Franks were closing in on them. Martel positioned his forces where they could not be bypassed, drew them into an infantry square and had them lock shields, leaving the Moors in a crummy position. For a full week, aside from the occasional skirmish, the two armies had a staring contest. Finally on day seven Rahman ordered an attack.

Since horses often have more sense than people and won’t charge a solid wall of spears and swords, the Moors could only ride up, fire an arrow or toss a javelin or two, and then gallop away. The Franks, protected behind their wall of steel, countered by hacking the stuffing out of anyone that came up on them, racking up high causalities among the lightly armored enemy.

During one of those charges, Moorish leader Abdul Rahman Al Ghafiq was killed when he was trying to restore order to his soldiers who were paying more attention to protecting their plunder than the battle. The Islamic army retreated south later that same night.

Most modern historians believe that Martel’s victory at Tours shaped the course of Western Europe. Had the Franks fallen to the Moors, there was no other power in existence at the time capable of containing Islam’s spread, meaning there would have been no Charlemagne (Martel’s grandson) or Holy Roman Empire. Christianity and Europe as we know it today may have hinged on that one battle.

In addition to changing the course of Western civilization, Martel’s brilliant strategic military mind and his ability to coordinate cavalry and infantry enabled him to beat the much larger Islamic army. The Battle of Tours marked the first time a European force of heavy infantry defeated a Moorish cavalry army, and established the Franks as the premier military power in Europe for years to come.