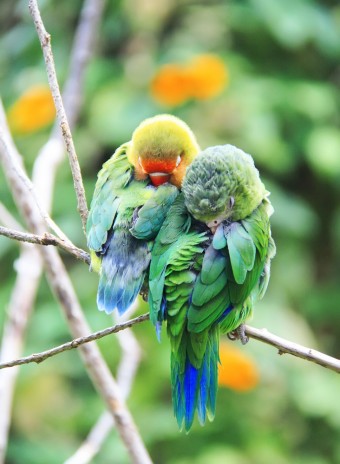 Everyone needs sleep, but for many birds, by necessity this has to happen while perched on a branch or other place that must be gripped. Anyone who has ever fallen asleep reading and found her book on the floor knows how difficult it can be to hold onto something while snoozing. So how do perching birds do it?

Powered by tendons, the feet of grasping birds (think perching birds and raptors) have a pair of them in the back, flexor digitorum longus and flexor halluciss longus, which are connected to deep flexor muscles in the leg. The digitorum branches and works the three toes in the front, while the hallucis works the back toe, known as the hallux. Both stretch over the ankle, and when the bird lands and the ankle bends, this forces both tendons to automatically pull, thus clenching the toes closed. As long as the ankle is bent, the tendons and toes are locked into place. For perching birds, this results in a dependable grip that lasts even when sleeping.

Raptors use this automatic response for another purpose as well – grasping prey. As the raptor approaches its victim, its legs are outstretched, but when it lands, its ankles bend, pulling the tendons and closing the toes – resulting in a firm grip on its dinner. Even in flight, as long as the bird’s legs are bent, the tendons and toes remain locked on the prey.

Not all birds have this feature, and for those forced to sleep on the ground, some have developed another adaptation to slumber safely – sleeping with one eye open. Known as unihemispheric slow-wave sleep, some birds, like mallard ducks, can keep half of their brain (and its corresponding eye) alert while allowing the other half to take a break. With the mallards, they often rest in a row, with the ducks on the ends closing the eye next to their neighbors, but keeping the eye facing potential danger open.

Scientists have determined that these same birds can control this function, and during times of relative safety, are also able to rest their entire brains.