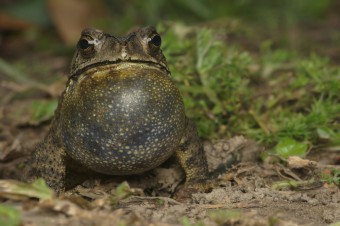 In the spring of 2005 during their mating season, toads in Germany and Denmark began exploding. Spewing guts, blood and skin for nearly a yard in every direction; the disturbing phenomenon at first baffled concerned scientists, although they eventually discovered the cause of the fatal condition.

Observed near two ponds during that spring, one in the Altona district of Hamburg, Germany, and the other near Laasby in Jutland, Denmark, some of the explosions were actually witnessed by environmental scientists.

First, they began with “several minutes” of “agonizing and twitching” followed by the toads blowing up like a balloon, and then culminating in an explosion. As the environmental workers noted, after “the toads burst, the entrails slid out. But the animals [weren’t] immediately dead – they keep struggling for several minutes.”

With no explanation at hand, scientists with Hamburg’s Institute for Hygiene and the Environment tested the pond’s water quality, searched for a fungus or virus (the latter of which was hypothesized to have been transmitted from horses at a nearby race track), and even considered the somewhat fantastical notion that the toads may have been purposely killing themselves to prevent overpopulation.

(Aside: Ants sometimes do something like this, for the good of the colony.  Specifically, certain species of ants have suicide bomber ants.  When these suicide bomber ants encounter enemies, such as ants from another colony, they will literally explode, causing a chemical to cover the enemies around them.  This chemical is extremely sticky and when it dries will immobilize any enemy ants, eventually resulting in them dying.

The Forelius pusillus ant also has worker ants that will sacrifice themselves for the good of the colony, but this time in a slightly different manner than the exploding ants.  Every night, the nest of a colony needs sealed off in such a way that the nest will be undetectable from the outside, in order to protect it from predators.  As such, sick ants or ones who are older will apparently volunteer to perform the task of staying outside the nest at night.  Once all the rest of the ants are inside, the sacrificial ants will seal up the entrance and usually will end up dying from being left outside.  Even when researchers have collected these sacrificial ants and taken care of them, they usually die soon anyways, which is why it is thought that generally older or sick ants are chosen for this task.)

In any event, each of these theories on the exploding frog front were rejected, and authorities were forced to warn residents away from the pools until an answer was found.

This last was especially significant, since it proved that neither rats nor raccoons were attacking the toads. Of particular note, however, was the size of the circular incision, which matched the size of a bird’s beak. Knowing how clever crows are, Dr. Mutschmann theorized the birds were aware that the toad’s skin was poisonous, but that the nutritious liver could easily be popped out with little toxic exposure.

His theory also explained how the toads’ exploding reaction appeared to come well after they lost their livers. Since it was mating season, the toads would have been so distracted by their biological imperative that they wouldn’t have paid heed to a few quick pecks:

Only once the liver is gone does the toad realize it’s been attacked. It puffs itself up as a natural defence mechanism. But since it doesn’t have a diaphragm or ribs, without the liver there is nothing to hold the rest of its organs in. The lungs stretch out of all proportion and rip; the rest of the organs simply expel themselves.

After Dr. Mutschmann’s explanation came to light, besides being confirmed, it was soon discovered that exploding toad epidemics have happened before in Germany and Denmark as well as in Belgium and the U.S.