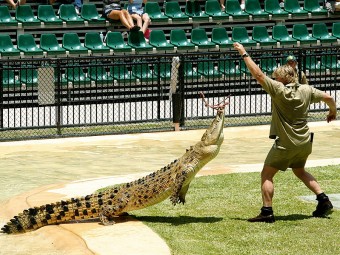 “I would never blame an animal if it bit me, because I’m at fault, not them. I heal so quickly. If you cut my arm off I would grow a new one.” – Steve Irwin

On September 4, 2006, popular Australian TV personality and environmentalist Steve “the Crocodile Hunter” Irwin died from a stingray wound while filming a scene for his daughter Bindi’s new TV series off the coast of New Queensland. He was 44 years old.

Known for his fearless interactions with creatures most of us wouldn’t come within 100 feet of, it sadly wasn’t a huge surprise that Irwin was killed by an animal rather than as an old man comfy in his bed. But, of course, one would have thought it would have been something like a crocodile, not a (relatively) harmless stingray.

Justin Lyons, who was Irwin’s cameraman and was with him at the time of his death, recalls that they were filming a final sequence of the stingray swimming off before wrapping up. That was when the fatal attack occurred. Lyons recalled what happened next:

All of a sudden it propped on its front and started stabbing wildly with its tail, hundreds of strikes in a few seconds. It probably thought that Steve’s shadow was a tiger shark, which feeds on them very regularly . . . I panned with the camera as the stingray swam away, I didn’t even know it had caused any damage. It wasn’t until I panned the camera back, that Steve was standing in a huge pool of blood, that I realized something had gone wrong.

The stingray had rammed its barb right into Irwin’s chest, but Lyons was hopeful that it had only punctured his friend’s lung and pulled him into their boat. He began to perform CPR and waited for more help to arrive.

His wife Terri was informed of her husband’s death while she was on a walking tour in Tasmania. The couple had two young children, Bindi, 8, and Bob, 3.

Deaths caused by stingrays are exceedingly rare as they are known to be dangerous only if provoked. The Acting director at University of Sydney Institute of Marine Science, Ross Coleman, said to his knowledge there wasn’t another incident similar to Irwin’s. “As a recreational diving instructor you hear of people getting injured by standing on them … but they rarely die,” Coleman said.

Justin Lyons always had a feeling Steve would go out in an odd way – even by Crocodile Hunter standards:

It was shocking. It was probably always going to be something weird with Steve, I mean, a crocodile or a shark, he was so good with animals, nothing was going to get him. We thought he was going to live forever, but it would always be a crazy silly accident, and as it turns out that’s exactly what it was.