September 9, 2014 Melissa
John A. asks: What causes warts and how do you get rid of them safely? 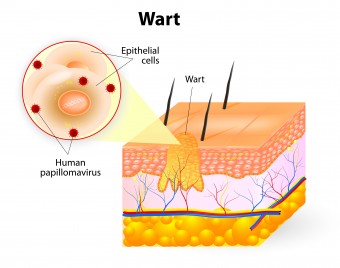 A viral infection caused by one of several ubiquitous strains (there are more than 100 known, with the vast majority of humans acquiring at least one strain at some point in our lives) of the pesky human papillomavirus (HPV), skin warts happen as the virus enters the top layers of skin – often through a small scratch.

From this, you probably deduced that you won’t be getting warts from frogs as the old wives’ tale goes. However, you can get them from other people who have warts – even from something as seemingly benign as wiping your hands on a towel recently used by someone with a wart.

As mentioned, there are several different types of warts.  Common ones include flat warts, which are often seen in larger numbers (up to 100 at a time). Anyone can get them, even on the face, although shaved areas are perhaps their most common sites. Another type is plantar warts, which grow on the soles of feet, often in clusters (which are called “mosaic warts”). Because of the pressure on the bottom of the foot, plantar warts often grow inward and/or look flat. Sufferers note that they feel like having pebbles in your shoe.  Yet another common type is filiform warts, which resemble threads or even small fingers. These warts grow quickly and are often seen around the orifices of the face.

Children and teens tend to get warts more often than adults, as do people with a weakened immune system. In addition, nail biters and pickers (nail, not nose) are said to be more susceptible as well.

A few simple precautions can lessen your chances of getting warts, but there is nothing that will absolutely prevent them. First, since warts most often infect the skin through small cuts, a frequent consequence of shaving, being careful when tending your beard or other hairy bits can decrease your risk of growing a wart.  You’ll also, of course, want to limit exposure to things someone with, say, a wart on their hand recently handled.

On that note, another preventative pro-tip is to wear shower shoes. Besides preventing the spread of “the fungus among us,” wearing flip-flops in locker rooms and keeping your shoes on in public will help keep HPV off your feet.

For certain strains of the virus, vaccines also exist.

There are a variety of treatments for warts, from home remedies (whether backed by any studies or not), to doctor supervised methods. One such home remedy many swear by (whether it really helps or not is up for debate) is to use the Crescent Wrench of sloppy fixes, duct tape. Keep a small strip of duct tape on the wart for six days at time to (supposedly) kill the virus, then soak and scrape it (like with an emery board), and then repeat. If this works, it will take a few months.  Interestingly enough, in a large number of cases, after a few months the warts will disappear on their own…  There have also been a few studies done looking at whether duct tape was actually doing anything here, with mixed results.  However, most of the studies indicated no benefit to the duct tape method over a placebo.

This brings us to some better methods.  Among them, we have salicylic acid, which has been shown to be fairly effective over a placebo.  Besides over the counter options, there are also prescription versions which have a higher concentration of salicylic acid. There are also over the counter scraper style options, peeling the wart away, one layer of skin at a time. These are effective at removing visual signs of the virus about half of the time.

For those who don’t want to mess around, you can try a little liquid nitrogen. Performed by a doctor, a small amount of liquid nitrogen is applied to the wart to freeze and kill it. Painful, a local anesthetic is usually applied first. In addition, it often requires more than one treatment to completely remove the wart.

Another medical method is curettage. A fancy name for a common procedure, curettage uses a scalpel or similar small tool to cut or scrape the wart off. A local anesthetic is often used, and the chances of the wart returning with this procedure are pretty good.

If you’d like to fry these little devils, you can also try electrosurgery. Sending an electrical charge through the skin, this procedure burns the wart, so, of course, a local anesthetic will be used. Warts often return after this treatment, as well.

Then, of course, there’s lasers. Burning the wart off with a bright beam of light, this procedure can also be painful, and if a lot of warts are involved, a general anesthetic may be required. Because this procedure leaves a painful wound, it is generally tried only after time and less costly methods have failed, and where the warts are very large or there are a lot of them.