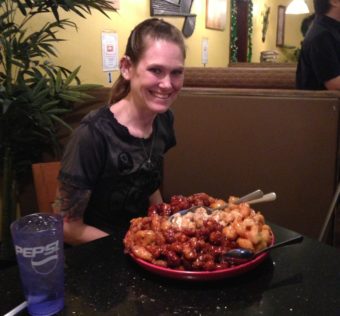 She maintains her lean frame by typically sticking to lots of vegetables, salads without dressing and keeping up with her four kids. She also notes, “We (competitive eaters) don’t eat like crazy all the time. That would just be impossible.”

Working on her craft, what she has referred to as “a stupid human trick,” since she was a child, Molly noted that at as a kid, when she and her siblings would go to a buffet, they “kind of battled it out. We’ve always ate big.”

Molly only recently signed with All Pro Eating, and she only began competitive eating in August 2012, but her career to date has been nothing short of remarkable, regardless of her size.

For starters, after a friend told her she could never finish a Steallanator (a burger with six each of patties, eggs and cheese, 12 pieces of bacon and a variety of toppings including peanut butter and jalapenos) served at Stella’s Bar and Grill in Bellevue Nebraska. Molly downed the monstrosity in 15 minutes in August of 2012, and a star was born.

Her next food feat happened in September of 2012 when she became the first woman to even try to consume the 5 pound hamburger (topped with 10 slices of cheese, lettuce, tomato and onion) along with the 1 pound side of French fries that make up Sinful Burger Sports Grills’ Goliath.  She was able to do it in 17 minutes and 3 seconds, a new record.  However, she was not done yet.  Just a couple months later in November, she did it again, this time competing against the previous record holder, Randy Santel.  She beat Santel and shattered her old record, eating the Goliath in just 6 minutes and 43 seconds, inspiring Sinful Burger to change the name of its challenge wall to Molly’s.

Among other of her major foodie accomplishments, she successfully completed the Pig Wing Challenge in 38 minutes (5 pounds of Pig Wings and 3 pounds of Corn Nuggets) at Starsky’s Bar & Grill. She also beat the Old River Pizza Company’s Big Axe Calzone Challenge in 11 minutes and 23 seconds (5 pound Calzone), which was a new record.

With Tyler Danforth, she polished off a Big Joe’s Pizza (a 12 pound pizza) in 28 minutes at Frank’s Pizzeria.

Still not impressed? She completed Nebraska Brewing Company’s Death Pizza Challenge in 24 minutes and 56 seconds. This is a 5 pound pizza slathered in lethal sauce made with ghost chili peppers- according to the Guinness World Records the hottest chili pepper.  For reference, it’s about 400 times hotter than Tabasco sauce, rated at about 1 million Scoville heat units.  Her time for this one was the record because no one had ever even tried it. For completing this challenge, she was given the honor of naming the pie, which she called “Molly’s Humble Pie.”

She also set a record in Sayler’s Old Country Kitchen’s 72 oz. Steak Challenge, eating it in a mere 2 minutes and 44 seconds.  What was the old world record for a 72 ounce steak? Six minutes and 38 seconds- crushed it.

But this was all child’s play compared to the Mad Greek Deli Challenge, at the Mad Greek Deli in Portland, Oregon.  There, in a mere 54 minutes, she somehow managed to consume a 12 pound sandwich, along with one pound of French fries, and a large soda.  For her efforts, she won $650.  She is also the only woman to have tried this one.

Even more remarkable was in January of 2014 when she set a new record on SportsRadio 94 WIP in Philadelphia where she consumed 363 chicken wings, breaking the previous record held by famed competitive eater Takeru Kobayashi, which was 337 wings.  She managed this feat in just 30 minutes (about one wing every 5 seconds).

Her competitor that day was Patrick Bertoletti, who managed 356 wings.  So close.  For winning this one, she won $22,000. Just to get into the door to this exclusive event, Molly had to qualify by eating 9 pounds of cottage cheese. (She did that in 1 min. 54 sec.)

She would later crush Patrick Bertoletti’s hopes and dreams again by narrowly beating him at the Independence Burger Eating Contest in July of 2014, eating 26 quarter pounders in just 10 minutes, earning a cool $1,500.

If you thought that was impressive, the very next day after winning the wing challenge, she entered IHOP’s Pancake Bowl where she consumed 59 pancakes then 5 pounds of bacon.  The day after that, she took the Adam Emmenecker Challenge (her third time completing this one), which was eating a massive cheese burger which includes a spicy pickle, bun, pork tenderloin, buffalo chicken tenders, white cheddar sauce, Fried Cheese curds, a Texas Brisket, Applewood Smoked Bacon, and, of course, the cheeseburger.  Oh, and they also throw in a pound of waffle fries.  To complete this challenge, you must eat all that in under 15 minutes. Difficult for most, child’s play for Molly Schuyler.  Given that she’s done it three times, one assumes that’s a meal she genuinely likes.

In May of 2014, she once again pushed the limits further in The Big Texan in Amarillo, Texas.  Here, she consumed a 72 oz steak, a shrimp cocktail, baked potato, salad, roll, and butter in 4 minutes and 58 seconds.  Not impressed? The previous record was held by Joey Chestnut, who did it in 8 minutes and 52 seconds.  Still not impressed? Perhaps to rub it in more, she had seconds, managing to eat the full meal twice in just 14 minutes and 57 seconds!

You can watch her do it here: