September 26, 2014 Melissa
Noah asks: Why is it that aluminium foil on the outer part is very shiny, but the other side isn’t? 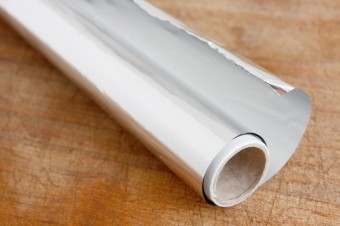 The most abundant metal in the Earth’s crust, aluminum naturally occurs as a compound with other elements, such as aluminum oxide or potassium aluminum sulfate. As such, it was not isolated as a separate element until 1825 when a Danish chemist, Hans Christian Oersted, was able to produce a small amount.

By 1845, a German chemist, Friedrich Wöhler, had perfected a way of producing enough aluminum to be able to study it. In 1854, the French chemist, Henri Étienne Sainte-Claire Deville improved on Wöhler’s method and developed a process to commercially produce the element, although it still remained expensive, even more than gold.

Other improvements were made independently by chemists Charles Martin Hall (American) and Paul L.T. Héroult (French) in 1886, and by Karl Joseph Bayer (Austrian) in 1888. As a result, sufficiently large quantities of aluminum oxide were now able to be produced from bauxite, and then aluminum could easily be obtained from the aluminum oxide.

This greatly reduced the cost of aluminum, and in 1888, Charles Martin Hall formed the precursor to the Aluminum Company of America (Alcoa), the Pittsburgh Reduction Company. Production methods continued to improve and by 1909, the Pittsburgh company’s output was at 41,000 kg per day. By 1910, the first manufacturing plant for the production of aluminum foil opened in Emmishofen, Switzerland by Dr. Lauber, Neher & Cie.

So why is aluminum foil shiny on one side and not as much on the other? In what is called the Bayer Process, after pure molten aluminum is obtained from aluminum oxide, it is placed in furnaces with a small amount of other elements (typically the final product will be between 99.8% and 99.9% aluminum). This liquid is then poured into “chill casting devices where it cools into large slabs called ‘ingots.'” Next the ingot is treated with heat (annealed), and then rolled between heavy rollers.

This initial foil is sent through still more rollers, several times, until it reaches the desired thinness. For the type of foil that is bright on one side and matte on the other, it is so thin that during some of the last rollings, two sheets of the thin foil must be placed together lest they tear or crimp during the final rolling of the sheets.