This Day in History: August 20th 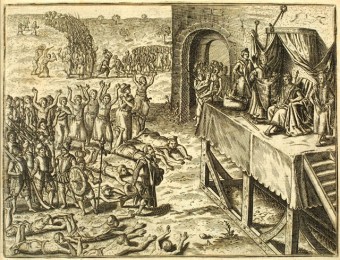 On August 20, 1619, the first seeds were planted for the American/African slave trade. Although the “20 and odd” Africans aboard the ‘Man of War” were not considered slaves as slavery as it became was not practiced in the New World at that time; little is known about their status. It is believed that they may have been indentured servants, contracted to work for a set period (usually seven years) after which they would be accorded the same rights as any other settler, and sometimes given land and/or money for their previous labors to help set themselves up in their new lives.

Even still, the Africans were not given any choice in the matter, as most historians agree that the Captain ordered the crew of the Dutch ship to steal them from a Portuguese slave ship that was heading from the West African port town Luanda, Angola. When the Dutch adventurers dropped anchor at Jamestown, they swapped the Africans with the settlers in exchange for food.

Luanda, Angola was unique among other African towns. Angola had recently become a colony of Portugal, and if these African people came from Luanda it’s very likely they been dealing with Europeans for years and may have shared a language, and even have been Christianized.

The records denoting their status in Jamestown after their arrival is perplexing. Africans are listed as servants from 1623-1624, but unlike their white counterparts, the year their servitude would conclude was not noted. Slavery began insidiously creeping into Virginia by 1654, when one former indentured servant who himself was brought over against his will from Africa to the Americas (in 1620) used the Virginia courts to permanently be allowed to keep one of his indentured servants as a slave.  His lawsuit against his servant who was seeking his freedom after completing the agreed upon years of service was successful, and the indentured servant became the first legal slave in what would become the United States. (Read more here: The First Legal Slave Owner in What Would Become the United States was a Black Man)

At this point, the colonies were desperate for field workers. At first, they looked to the Mother Country to help fill the gap, but a round of the plague thinned out the number of available workers, and the Great Fire of London provided plenty of jobs for those that survived.

Any attempt to coerce the Native Americans on a mass-scale into doing their bidding was completely unsuccessful as the Natives knew the terrain better than the settlers and could easily side-step efforts to enslave them, or when enslaved, escape wasn’t nearly as difficult as it was for those from the Old World.

So, out of economic “necessity,” the colonies got in on the slave trade, which had been proliferating in Europe for quite some time. It took less than a century from when those “20 and odd” Africans arrived in Jamestown for slavery to become firmly entrenched in the colonies and then for those enslaved to be near exclusively African in heritage, rather than mixed as in the beginning. And the rest is history.