Why Do Songs Get Stuck in Your Head? 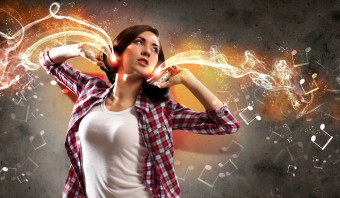 Whether yours is “Call Me Maybe,” “Who Let the Dogs Out,” “Mickey,” or something equally infectious, at one time or another, you’ve probably had a fragment from a catchy (or obnoxious) tune stuck in your head.

Where Do Sticky Songs Come From?

Due to the involuntary nature of songs getting stuck in people’s heads, it is notoriously difficult to study. As such, the exact mechanism in the brain that causes this phenomenon isn’t yet fully understood. At a higher level, some scientists see humanity’s ancient practice of passing down knowledge through song as a possible source for this tendency.

For most of the 200,000 years of modern human evolution, facts, history, processes and other information were transmitted and remembered through spoken and sung words. This has led some scientists to opine that the human brain has become hard-wired to encode spoken and sung information, and recall it upon demand. Consider that, even today, many find it easier to memorize something to which a rhyme or rhythm has been added.

Whether we were already heavily predisposed to this sort of thing or it’s been a relatively recent development in human history, the hard-wired brain theory builds on the fact that music is “multi-sensory” and asserts that while the notes and lyrics are being memorized, the feelings and ideas the music also triggers are stored along with it. Then later, when that feeling or idea is remembered, it sometimes also brings a catchy portion of the song back up with it, in what is called “involuntary memory.”

From here, our brains seem hard-wired to finish what they start with the portions of the songs. In fact, when researchers at Dartmouth played small snippets of familiar songs to research subjects, they found that the auditory cortex of the brain continued the song in the subjects’ heads even after the music stopped. It’s perhaps not surprising from this that the more you listen to a song, the more likely it is that at some point it will stick in your brain. Further, people with Obsessive Compulsive Disorder have been shown to be more prone to getting songs stuck in their heads.

That said, according to the Proceedings of the 10th International Conference on Music Perception and Cognition, over 90% of us get a sticky song (also known as an “earworm”) at least once a week. It is further estimated that approximately 98% of humans experience sticky songs at some point or another.

Scientists have identified two main sparks that are commonly found to trigger an earworm.

As mentioned, exposure is perhaps the most common reason a song fragment lodges in your noggin. This includes both how recently you’ve heard a song and how often it was repeated. Given that the vast majority of the time we listen to music, we’re listening to something we’ve already heard before, the odds of getting an earworm are pretty good.

Two recent examples of overplayed, popular tunes that can easily get stuck in your head are Robin Thicke’s “Blurred Lines” and “Let It Go” from Frozen.

Sometimes an aspect of your environment will trigger an earworm, including words, persons, rhythms, situations and sounds. For instance, while doing household chores, songs like Rose Royce’s “Car Wash,” Don Henley’s “Dirty Laundry,” and Fishbone’s “Housework” may play inside your head. Likewise, more indirect associations may develop, such as something going on around you when you hear a song causing your brain to associate the song with otherwise unrelated external factors.  Later, when you’re in that same environment, your brain may dredge up the song and repeat the most memorable part of it over and over again in your mind.

There are certain characteristics, of both songs and people, that make catching a sticky song in your head much more likely.

The tunes that are more likely to trigger earworms:

Tend to have notes with longer durations but smaller pitch intervals . . . [which are also the] two main features that make songs easier to sing, even for the musically untrained. . . . . Fundamentally, an earworm is your brain singing. . . .

Exemplars of this include the J. Geils Band’s “Centerfold,” the B-52’s “Love Shack,” and Lady Gaga’s “Poker Face.”

In at least one study, a strong connection was found between those people who “placed a high degree of importance on music,” and the frequency, duration and irritation caused by an earworm.[1] This may lend itself to the “overplayed” trigger, with music lovers simply listening to music more often than most.

As mentioned, people who tend to be more obsessive (but not clinically neurotic) are more likely to have earworms. They also often report feeling like they have less control over the phenomenon. Additionally, studies have shown that in some individuals certain medication used to treat OCD can reduce the frequency of a song getting stuck in one’s head.

Sticky songs prey on the idle, tired and stressed, when defenses are low and the brain isn’t too busy for an earworm to take hold. This is precisely what happened to the injured mountaineer who, stuck on a glacier and fearing he might die, couldn’t get away from Boney M’s “Brown Girl in the Ring.”

There are several tricks you can try to help drive sticky songs away.

Think of Another Song

In a recent British study, one of the favorite treatments noted by earworm sufferers was to fight fire with fire (and maybe even “Fire“) by thinking of another tune. Among the most popular antidote songs listed by participants were “God Save the Queen,” Led Zeppelin’s “Kashmir” and Culture Club’s “Karma Chameleon.” With this last, however, I wonder if the remedy isn’t worse than the disease…

Think of Other Stuff

One expert recommends “using your words” to kill an earworm. She notes that simply by speaking with someone else, or thinking through the words of a crossword puzzle, the lyrics of the song will be supplanted with new lexemes.

Others say anything absorbing will work: “The key is to find something that will give the right level of challenge. . . . If you are cognitively engaged, it limits the ability of intrusive songs to enter your head.”

Listen to the Damn Song

If all else fails, you might have to try wearing the beast out by listening to the full song, rather than just the repetitive snippet running through your head.