This Day in History: June 24th 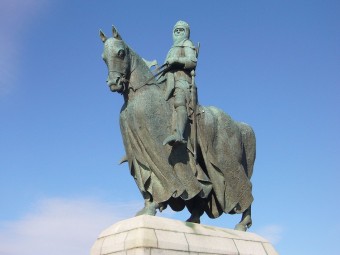 When the Scots met the English on the battlefield in 1314, they were heavily outnumbered, but after almost a decade of plundering and guerrilla warfare in Northern England, they were prepared to meet the enemy head-on. The Scots and the English had fought many, many times before, but this particular battle proved pivotal for the Scots in gaining their independence.

The Battle of Bannockburn was actually waged over the course of two days: June 23/24, 1314. This is remarkable in an era when most battles were fought within a matter of hours. What exactly went on at Bannockburn is unclear as no-one bothered to write down the details of the battle until much later, but to be fair, the surroundings probably weren’t all that conducive to taking notes.

An English king hadn’t led an army into Scotland since Falkirk, when Edward Longshanks decimated William Wallace’s forces in 1298. Now his son Edward II rode north to meet Scotland’s king, Robert de Bruce, in battle. As soon as King Edward crossed the border into Scotland he found the road to Stirling blocked. From that point on, it was nothing but problems, problems, problems for the English.

Robert de Bruce had a score to settle with King Edward. The English had been holding his wife, daughter and sisters as hostages for seven years. His brothers had all been hanged, drawn and quartered, and most of his friends and allies had met similar fates at the hands of the English. A man with nothing to lose is dangerous to face on the battlefield.

The battle began with one of the most memorable moments in Scottish warfare when Sir Henry de Bohun, an English knight, spotted Robert de Bruce and decided to be a hero. Charging on the King, he lowered his lance, most likely thinking of all the glory and lasses he’d get after taking out de Bruce.

Unfortunately for de Bohun, the King had brought along his favorite battle axe, and as soon as the Englishman was within striking distance, de Bruce spilt open both de Bohun’s helmet and skull with one mighty blow. So much for de Bohun’s heroic act of awesomeness. Their King’s bad-ass skills massively boosted Scottish morale and they forced the English cavalry to withdraw. The Scots took the first day’s battle.

The next day was no better for the English. What with a disastrous river crossing and trying to negotiate the boggy ground, the English cavalry once again proved no match for the Scot’s spears. Bruce ordered his men to push forward and another torrent of spears sent King Edward’s forces careening back. At this point, the English King mistook the Scottish camp followers as additional enemy forces and panicked.

As the English troops scrambled to escape across the river, fallen men were trampled underfoot. Soldier’s coats were so bloodied that the coats of arms were impossible to make out. Many drowned in the Bannock Burn as they tried to flee, and very quickly the river was filled with the bodies of both men and horses. Not surprisingly, the Scots won Day Two as well.

The Battle of Bannockburn was a resounding victory for Robert de Bruce, leaving him in complete military control of Scotland. He also secured Scotland’s defacto independence and his own claim to the Scottish crown. And lastly, in exchange for a few English nobles he’d been holding on to, he was reunited with his wife, daughter and sisters.

And for all of Scotland, there was the satisfaction of finally telling England where they could stick it.