This Day in History: June 18th 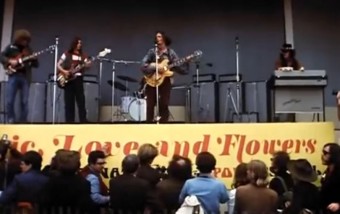 The Summer of Love was ushered in by the Monterey International Pop Music Festival, a three-day event held June 16 through June 18 in Monterey, California at the Monterey County Fairgrounds. Monterey was the venue where The Who, Ravi Shankar and Jimi Hendrix all made their first major American appearances. The Festival was also the first time that Janis Joplin and Otis Redding performed before a larger, mainstream audience. The acts that rocked Woodstock cut their teeth at Monterey.

The Monterey Pop Festival was a truly ground-breaking event, setting the bar for all the music festivals to follow. The organizers of Monterey, John Philips of the Mamas and the Papas, producer Alan Pariser, promoter Lou Adler and the Beatles’ press officer Derek Taylor, arranged for adequate medical and security staff for the crowd of 200,000, as well as trained volunteers whose sole function was to deal with audience members having bad trips.

Our idea for Monterey was to provide the best of everything — sound equipment, sleeping and eating accommodations, transportation — services that had never been provided for the artist before Monterey…

We set up an on-site first aid clinic, because we knew there would be a need for medical supervision and that we would encounter drug-related problems. We didn’t want people who got themselves into trouble and needed medical attention to go untreated. Nor did we want their problems to ruin or in any way disturb other people or disrupt the music…

Our security worked with the Monterey police. The local law enforcement authorities never expected to like the people they came in contact with as much as they did. They never expected the spirit of ‘Music, Love and Flowers’ to take over to the point where they’d allow themselves to be festooned with flowers.

Musically, the festival had something for everyone. Everyone from the Association to the Animals was there. Lou Rawls,The Byrds, The Jefferson Airplane, The Grateful Dead, Buffalo Springfield, The Mamas and the Papas, Booker T and The MGs … Monterey Pop set the creative blueprint that music festivals still follow to this day.

Young people heading out west for Monterey Pop even had their own theme song: “San Francisco (Be Sure To Wear Flowers In Your Hair)” by Scott McKenzie, a tune written by John Phillips specifically to promote the festival. Thousands of flower children took this advice to heart and made their way to San Francisco. Some just for the festival, many for the entire Summer of Love, and some for much longer. A few may still be there now, wondering what year it is…

Monterey Pop achieved legendary status before the year was out. Eric Burdon and the Animals recorded a song later in 1967 called “Monterey,” which mentions The Byrds, Jimi Hendrix and The Grateful Dead, among others. There’s even a nod to Brian Jones from The Rolling Stones, who didn’t perform at Monterey, but was in attendance (“His Majesty Prince Jones smiled as he moved among the crowd.”)

A documentary film capturing the festival was done by acclaimed film maker D.A. Pennebaker, and has been instrumental in making Monterey Pop required viewing for anyone claiming to be a fan of classic rock. It captures a slice of time before Woodstock, and definitely before Altamont, when wearing flowers in your hair could be done without a trace of irony.