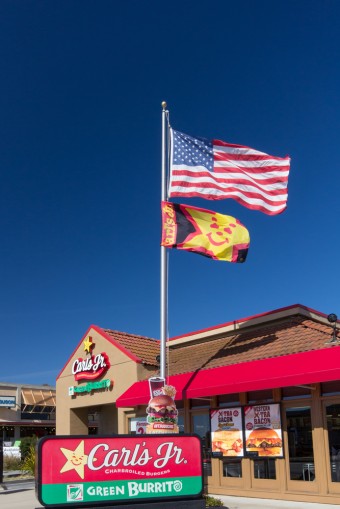 It must not have seemed like much at the time, and certainly the hot dog cart business might have failed, leaving them in debt. Fortunately for them, it didn’t take long for their hot dog cart to do well enough that they were able to buy another one. A couple years after starting their little business, the Kerchers were operating four hot dog carts.

Business just kept booming, and before long the Karchers were able to buy a restaurant, which they called Carl’s Drive-In Barbecue. In addition to the usual hot dogs, hamburgers were added to the menu, which turned out to be a good business decision on their part.

By the 1950s, the couple was able to purchase another, smaller restaurant; this one focused on quick service. This was the first “fast food” venture on the Karcher’s part. On opening day, Carl’s Jr. only made $14.75 (about $140.87 today).  Needless to say, it got better from there.

Fast-forward to 1981, and Carl Karcher established Carl Karcher Enterprises with some 300 restaurants under his belt at this point.  The restaurant chain continued to expand and today there are over 1000 Carl’s Jr. locations.

Carl Karcher died in 2008 at the age of 90, two years after his wife of 67 years, with the company they started with $311 and some elbow grease expanding to over 3000 restaurants (including Hardee’s, which they purchased in 1997) spanning 40 states and 13 countries. Fast-forward five years later in December of 2013, just 72 years after that first hot dog stand, and Carl Karcher Enterprises was purchased in a deal valued at $928 million by Thomas H. Lee Partners.