The “Kill It With Fire” Asian Giant Hornet 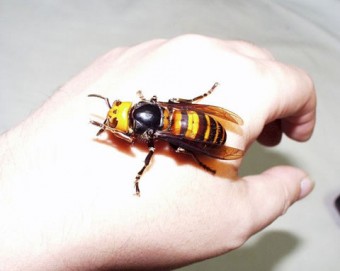 At nearly twice the size of its nearest relatives and holding enough venom to kill a man, the Asian Giant Hornet is a menace to people, bees and wasps alike.

Eusocial, like other stinging insects, Vespa mandarinia live in well-organized colonies with a single queen and a host of drones and female workers.

The Asian Giant Hornet is found throughout eastern and southeastern Asia (and lately, France), and prefers forests and low mountainous areas. It usually nests underground, either in the cavities formerly occupied by rodents or in homes it digs for itself, but has been found in tree hollows as well.

The largest of all hornets, about the size of your thumb, queens of this species can grow to about two inches in length, while female workers and male drones are slightly smaller.

Regardless, both sexes have light orange heads with:

A set of compound eyes that range from dark brown to black. [They] also have three simple eyes that are similar color . . . [and] can be distinguished from other species by the presence of a deeply incised clypeus [head plate] and a rather large genae [side of the head]. The mandible is relatively large and is a deep orange hue, with a black tooth that can be used for burrowing.

Their enormous (for a wasp) bodies are dark brown, along with orange yellow striping on the abdomen. Its large grey wings can reach widths of nearly 3 inches.

Males, like other wasps, do not have stingers. But the ladies do – in the last section of their abdomens where “the stinger region can reach up to 6 mm and the associated toxin is considerably venomous.

The new queen gets busy in autumn and, now impregnated, overwinters in a safe place. The males die once breeding season ends, while the old queen and the female workers all die over winter.

In the spring, the new queen again gets busy (in a slightly different way) by making: “A rudimentary nest [where] she produces an initial clutch of up to 40 eggs, which becomes the first generation of workers.”

For this first brood, the new queen must play the role of worker as well, feeding and tending her first born during the 40 days or so it takes them to develop from egg to larva and then: “The pupal stage [where they] undergo complete metamorphosis [and] . . . emerge as adults.”

In the fall, these new queens emerge with a new set of males, and:

Sex pheromones are . . . used to initiate male sexual behavior. Once a queen exits the nest, a male will seize her in mid-air, causing both of them to fall to the ground. Copulation continues for 8 to 45 seconds . . . . [Then] the queen finds a place to overwinter.

Although Vespa m. will eat fruit and tree sap, it prefers to ingest other insects including beetles, hornworms and mantises. But by far the most dramatic food of this uber-predator is other wasps and bees, which it devours by the colony:

[At] the end of summer . . . . solitary workers wait[] near the entrance to a hunted hive. These workers capture prey in flight using their mandibles. The prey are bitten to death, and body parts are removed. . . . Attacking hornets return to their nest and feed the prey to their larvae. . . . The second phase [eventually begins and] is termed the slaughter phase [as it] involves 2 to 50 V. mandarinia hornets . . . attacking . . . a single hive or nest that has been marked with a chemical secreted by a . . . worker. The attackers usually stay near the hive entrance and kill counter-attacking prey. The dead bodies are ignored during the slaughter phase. Vespa mandarinia casualties are uncommon during attacks on Apis mellifera [honey bee] hives, but up to half of the attackers may be killed in an encounter with another Vespa [wasp] species. Once engaged in this part of the attack . . . the hornets will not stop . . . . In a particularly long slaughter phase, attacking V. mandarina occasionally will starve to death.

At the end of the butchery, the Asian Giant Hornets (which nearly always prevail, with the only effective defense tending to be balling the hornets, which only works if the attacking group consists of a small number) occupy their victims’ hive as if it were their own.

In recent years, Vespa m. populations have exploded in parts of China, where 42 people died and more than 1,600 were injured from hornet attacks in 2013, alone.

Attracted by human sweat, and disturbed by human activity (particularly running), the hornets vigorously defend their territory, chasing people up to 600 feet and stinging them multiple times with their very toxic venom that can cause: “Anaphylactic shock and renal failure. One of the victims . . . said she has spent two months in a hospital undergoing 13 dialysis treatments. . . . She has 200 stiches, but still cannot move her legs. She told . . . a news agency . . . ‘They hit right at my head and covered my legs. All of a sudden I was stung and I couldn’t move. Even now, my legs are covered with sting holes.'”

The venom itself destroys red blood cells which can cause kidney failure, and also creates relatively large holes in skin that resemble nothing if not an entry wound from a bullet.

Some scientists attribute the rise in Asian Giant Hornet populations to warmer temperatures: “More than 99% of queens normally die over winter and spring, so small variations in this mortality rate can lead to massive differences in the numbers of nests each year. So given the opportunity, a hornet population has a massive potential to expand rapidly…”

Apparently, this top predator was inadvertently introduced to France in 2004 along with some imported goods from China. According to reports, it is now found in nearly 40% of France’s administrative departments, and in the spring of 2014, at least six deaths there were attributed to the Asian Giant Hornet.

Authorities in Great Britain are concerned that the pest may migrate northward, as it was noted in a recent Environmental Audit Committee report.