Why Does Aspirin Prevent Heart Attacks? 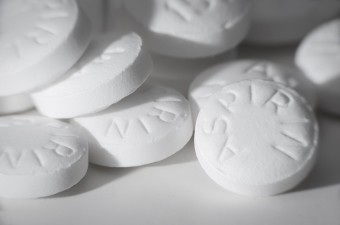 The wonder drug once gleaned from the bark of a willow tree is today used to help prevent heart attacks and strokes. But not everyone benefits from daily aspirin therapy.

As early as Hippocrates (400 BC), people were harvesting willow to treat pain. Today, aspirin is: “Acetyl salicylic acid . . . a synthetic derivative of a compound, salicin, which occurs naturally in plants, notably the willow tree.”

When derived straight from salicin, salicylic acid is “hard to swallow, causing irritation to the lining of the mouth and stomach.” In response, a buffer was added to make the medicine easier to take and a “process of synthesizing the acetyl salicylic acid” was developed.

How Does it Work, Generally?

To reduce pain and inflammation, aspirin blocks: “An enzyme known as prostaglandin synthetase or cyclooxygenase. The body needs this enzyme to make precursors for most of the half-dozen known prostaglandins [(hormone-like substances) including] . . . those that make it easier for nerve cells to pass pain signals from one to another, those that raise fever and those that promote the swelling of inflamed tissue.”

How Does Aspirin Prevent Heart Attacks and Strokes?

When you suffer a cut or other bleeding injury, platelets (clotting cells in the blood) rush to the wound and build up, forming a seal that stops the vessel from bleeding. In order to be available to perform this life-saving function at a moment’s notice, platelets must be present throughout the circulatory system. Although in a perfectly healthy blood vessel platelets pose no threat, when a person suffers from atherosclerosis (narrowing or hardening of the arteries due to build-up of substances including cholesterol), the platelets could add to the build-up and form a blockage – which leads to a heart attack or stroke.

Luckily, the thromboxane that activates and aggregates platelets is as susceptible to the anti-inflammatory effects of aspirin as the prostaglandins that cause fever, pain and swelling: “The drug blocks a platelet enzyme, cyclo-oxygenase, by acetylating the enzyme’s active site. Inhibition of the enzyme blocks production of an important prothrombotic agent known as thromboxane A2 . . .”

Or in plain language: “Aspirin prevents heart attacks and strokes by permanently blocking one path to a platelet’s ability to become “activated” and cause a clump of platelets in a blood vessel . . . [which] blocks blood flow which causes the attack.”

Of course, even on aspirin therapy, your blood will still clot – just not as efficiently. It would be counterproductive to take a medicine that made you bleed to death.

Since it decreases the platelets’ ability to clot: “We do bleed more when taking aspirin. Also, aspirin is irritating to the stomach, so it can cause ulcers which then bleed a lot since the platelets don’t clump as well to stop the bleeding.”

Adding insult to injury, “aspirin inhibits the formation of substances that protect the stomach’s delicate lining,” a condition which contributes to even more bleeding in the gut. Furthermore, in a recent Women’s Health Study, it was show that aspirin therapy was “linked with an increased risk of bleeding (hemorrhagic) strokes” in women.

So Who Should Take Aspirin Therapy?

Recent “clinical trials seem to show that aspirin may not prevent first [heart] attacks” or strokes, although experts caution people from reading too much into this. First, they warn it is difficult to conduct research on the efficacy of a treatment in people who have never suffered from the condition, and second, aspirin works differently depending on the type of delivery (coated, sustained release, etc.). So, the findings may not be as definitive as they might seem upon first reading.

After considering the costs and benefits of daily aspirin therapy, at least one doctor has concluded:

In the 10-year Women’s Health Study of 40,000 female health workers age 45 or older, it was revealed that, overall: “Aspirin had no effect on heart attacks, nor did it influence deaths from heart disease or stroke.”

The researchers did, however, find that it reduced the risk of stroke by 17%, a fact deemed: “Important . . . since more women have strokes each year than heart attacks. This is the reverse of what studies have shown in men – that aspirin prevents heart attacks but seems to have little effect on stroke.”

In addition, the study’s authors found that among the 10% of test subjects who were 65 or older: “In this group, aspirin prevented a significant number of strokes and heart attacks . . . in the same ballpark as it was for men [in another study].”