The Origins of the Names of Canada’s Provinces and Territories 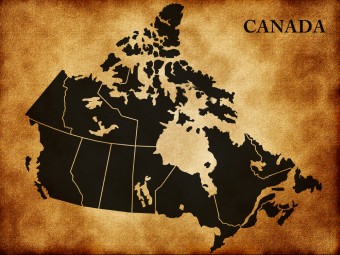 Today I found out the origins of the names of the Canadian provinces and territories.

Princess Louise Carolina Alberta gave her name to this province when it was made a district in 1882 (later to become a province in 1905). Not only was she the daughter of Queen Victoria and Prince Albert, but she was also married to Lord Lorne, the Governor General of Canada from 1878 to 1883, making the name a natural choice. She also lent her name to Lake Louise and Mount Alberta.

British Colombia was named after the Colombia River which runs through it. The Columbia River was named after the Colombia Rediviva, a ship captained by Robert Gray. The ship is famous for being the first American ship to circumnavigate the globe, and it spent a lot of time as a fur trading ship in the Pacific Northwest. When Gray stumbled upon the river, it seemed only natural that it should take the ship’s name. “British” was added to the name when the area was just a district, so that it could be distinguished from what would be known as the Oregon territory in the U.S.

There are a couple of different theories about how Manitoba, which became a province in 1870, got its name. Everyone agrees that Lake Manitoba was probably named first, and the province was named after the lake—but what does Manitoba mean? Some people believe that it comes from the Assiniboine words mini tobow, which mean “lake of the prairie.” More likely, it comes from the Cree maniotwapow, which means “the strait of the spirit.” The pebbles on the beach of Manitoba Island in Lake Manitoba end up producing a roaring sound, which led to a legend that a spirit (or manito) beats a drum there.

Like most “New” names, New Brunswick was named after an old Brunswick—that is, the House of Brunswick, from which King George III was descended. The name comes from a German town called Braunschweig. In German, braun means “brown” while the English wick means “village.” Other names on the table for New Brunswick included New Ireland, rejected because Ireland was out of royal favour at the time, and Pittsylvania, named after the British Prime Minister William Pitt.

Newfoundland is one of the oldest place names on the eastern seaboard. It was named Terra Nova, or “new land,” by John Cabot when he discovered the area in 1497, as he thought it was a “new found land” (not knowing that the Vikings had preceded him). Today, the name is shown as the English translation. In 2001, there was an amendment to make the name of the province Newfoundland and Labrador. Labrador comes from the word lavrador, which means “land holder.” The story goes that the area was named after the lavrador João Fernandes.

The Northewest Territories used to cover a huge percentage of Canada, but it lost land as more and more provinces and territories were established. It’s so named because it’s in the northwest, as you probably already guessed. At one point, Canadians were talking about changing the name to something more imaginative. One proposal was Denendah, which means “our land.” However, it hasn’t yet caught on.

Nova Scotia means “New Scotland.” The name was applied to the area in 1621 by Sir William Alexander, but the name wasn’t officially adopted until almost a century later in 1713. Previously, the area had been known by the French as Acadia, taken from Arcadia. Bonus Fact: Scotland got its name from the word Scoti, which was a derogatory name given to the Gaelic people who came over to Britain from Ireland.

The Nunavut territory was carved out of the Northwest Territories in 1999. The name comes from the Inuktitut word which means “our land.” Inuktitut is still an official language of Nunavut, along with English, French, and Inuinnaqtun.

Lake Ontario was named first, and the province of Ontario adopted the name afterwards. Originally, the lake was called either Onitariio, which means “beautiful lake,” or Kanadario, which either means “sparkling” or “beautiful.” When Europeans learned the name, they made it easier for English-speakers to say, and shortly afterwards applied the name to the land on the shore of the lake. Ontario became a province in 1867.

As you can probably guess, Prince Edward Island was named after none other than Prince Edward, Duke of Kent, who happened to be Queen Victoria’s father. When the British acquired the area in 1759, Prince Edward was commanding British troops in Halifax. The island was later separated from Nova Scotia and made its own province in 1873.

Quebec comes from an Algonquin word that was originally spelled quebecq or kèbec. According to Samuel de Champlain, it meant “straight by the river,” likely referencing the area where the river narrows at Cape Diamond. The name was first applied to the city, and then to the province.

Like other places in Canada, Saskatchewan was named after a body of water found in the region—in this case, the Saskatchewan River. The Cree called the river Kisiskatchewani Sipi, which meant “swift-flowing river.” When Anthony Henday explored the area, he recorded the name as Keiskatchewan. This then turned into the Saskatchewan we know today, which was adopted in 1882 when it became a provisional district of the Northwest Territories (later becoming its own province in 1905).

The Yukon Territory was established in 1898 following the Klondike Gold Rush. The name comes from the native word Yu-kun-ah, which means “great river.” The name was first applied to the river in question, and the territory took on the name. The proper name for this area is now simply Yukon, having gotten rid of the “Territory” several years ago, even though it is still classified as a territory and not a province.