Why Are Strikebreakers Called Scabs? 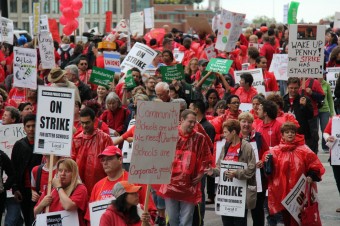 Striving to win safer working conditions, shorter hours and better pay, over the past few hundred years laborers have periodically joined together in work stoppages, called strikes. Only effective when the work needed by the “boss” (be it a single business, a whole industry or an entire nation) doesn’t get done; if replacement workers do the strikers’ jobs, the strike usually fails. As you can imagine, those replacement workers are not, and historically have not, been very popular.

Derived from the Old English sceabb and the Old Norse skabb (both meaning “scab, itch”), the word “scab” had become an insult by the late 1500s, having adopted a secondary definition that meant “a lowlife“.

With an increasing number of strikes, and therefore replacement workers, during the second half of the 18th century in England, the word “scab” was put into use as a derogatory term for strikebreakers, as noted in Bonner & Middleton’s Bristol Journal in 1777:

The Conflict [between labor and capital] would not been [sic] so sharp had not there been so many dirty Scabs; no Doubt but timely Notice will be taken of them.

Throughout the 19th century, scabs in the U.S. were frequently recruited from new immigrant and other economically challenged communities, and often had no idea they would be breaking a strike until they crossed the picket line. Regardless, scabs were so reviled, that, in response to the use of Chinese immigrants to break strikes (and the perception that they were taking all of the jobs), Congress passed the Chinese Exclusion Act in 1882.

In 1905, Jack London (yes, that Jack London) justified a hatred of scabs:

He who takes from another man’s purse takes from his existence. To strike at a man’s food and shelter is to strike at his life . . . . It is for this reason that a laborer is so fiercely hostile to another laborer who offers to work for less pay or longer hours. . . . In addition to the use of bricks, clubs, and bullets, the [striking] laborer finds it necessary to express his feelings in speech. Just as the peaceful country-dweller calls the sea-rover a “pirate,” . . . the [striking] laborer applies the opprobrious epithet “scab” to the laborer who takes from him food and shelter . . .

Not limited to mere epithets, however, the early labor movement was rife with violent episodes, and striking workers were sometimes killed. Scabs were not immune to this brutality, including those attacked during the Herrin Massacre of 1922, when heavily armed union miners forced a group of strikebreakers to surrender:

The union workers forced the strikebreakers to walk toward Herrin. On the way, a man with a revolver stated, “The only way to free the country of strikebreakers is to kill them all off and stop the breed.” . . . Two men took [the mine superintendent] away from the pack. Later, a farmer heard gunshots and . . . [he eventually] found [the superintendent] with two bullet wounds in his stomach, one through the body, and one through the head. The prisoners and the angry mob continued [on to] where yet another group of radical union workers waited. In the woods was a large barbed wire fence. The hostages were placed in front of it and told to run for their lives. Fire rang out and some of the strikebreakers were hit. Others climbed over the fence. . . . One of the radicals noticed that Shoemaker [the assistant superintendent] was still alive and shot him in the head. Some men made it past the fence but were tracked down and murdered.

At the end of the day, somewhere between 18 and 20 men, including detective agency employees, professional strikebreakers and non-union scabs, had been killed. Buried in the Herrin Cemetery, not a single relative appeared for their interment. If one of the union members who attended the burial gave a eulogy, he may well have relied on another famous quote by Jack London:

After God had finished the rattlesnake, the toad and the vampire, he had some awful substance left with which he made a SCAB. A SCAB is a two-legged animal with a corkscrew soul, a water-logged brain and a combination backbone made of jelly and glue. Where others have hearts he carries a tumor of rotten principles. A strikebreaker is a traitor to his God, his country, his family and his class!