March 5, 2014 Emily Upton
Ashley asks: Why do people have grass lawns? They are so expensive and a lot of work, not to mention bad for the environment. Whose brilliant idea was this? 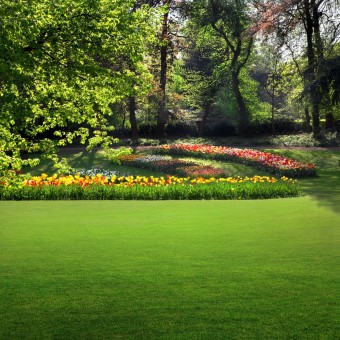 Maintaining the perfect lawn takes a lot of work. There’s mowing, fertilizing, aerating, and watering. Having a trimmed green field leading up to your front door is something of a status symbol, and in some cases having a messy front lawn can get you into trouble with your more obsessive neighbours.

Turns out, the grass lawn as a status symbol has its origins in European aristocracy. The very first lawns were grassy fields that surrounded English and French castles. Castle grounds had to be kept clear of trees so that the soldiers protecting them had a clear view of their surroundings. It wouldn’t do for enemies to be able to sneak up on the castle through the forest.

Without trees, grasses sprouted naturally just like they do in fields and clearings today. The word lawn actually comes from the Middle English word launde, which meant a “glade or opening in the woods” where grasses were exposed to sunlight and allowed to run wild. Back in the day, a launde could also refer to a common area in a village where farmers were able to graze their livestock. As the sheep and cows “mowed” the lawn, they also left behind fertiliser, ensuring the grass would keep growing.

It is believed that such lawns were deliberately cultivated around English and French castles starting in the 16th century. However, it’s thought that chamomile and thyme were commonly used at this point for these deliberate lawns, instead of grass. Both are great alternatives that require less maintenance than traditional turf grass.

“Grass,” specifically, is a term for the plant family Gramineae, which encompasses over 9000 different species of plants.   By the late 17th century, grass lawns, with the grass cut close to the ground, started popping up on the grounds of the wealthy, such as at the famed Versailles gardens in France where “green carpet” (tapis vert) was included in André Le Nôtre’s landscape design.

This practice quickly spread among the elite, who partially used animals to keep things mowed down, but for the very wealthy, hired help was also used. Without lawnmowers, it took a lot of manpower on large lawns to scythe and weed the grass, making a nice, tidy lawn free of animal droppings very much a status symbol.

A variety of factors caused grass lawns to become more popular. First, the Industrial Revolution resulted in the first lawn mower, originally developed by Edwin Budding in 1830, and popularized by the late 19th century. Being able to do away with scythes and back-breaking, expensive labour meant that trimmed grass lawns became more accessible to the average person.

Secondly, a man named Frederick Law Olmstead, the “father of American landscape design”—who you might know as the man who designed Central Park in New York—was also designing suburbs where each house had its own little lawn. This further popularized the idea that houses should have grass lawns. Ironically, people also wanted to move away from the industrialization of cities and create their own green “Eden” away from all the concrete. So they took their industrial-made lawn mowers to trim up the grass on their new property.

Thirdly, the games of golf, bowls, and certain other sports were becoming much more popular in North America, as people were working less hours and having more time to themselves. A lush, green lawn was necessary for these games to be played properly on your own land. That led to some experimentation with turf—the sort of grassy lawn you know today—to develop the best type of grass.  For instance, in the early 20th century, the U.S. Golf Association with help from the U.S. Department of Agriculture conducted extensive research on grass cultivation and maintenance.

But if we’re to blame anyone for having to mow the lawn every weekend throughout the summer, the man to blame is Abraham Levitt, the founder of Levittown (declared the “ideal” of American suburbia in the late 1940s and early 1950s). Levitt and his sons created the first suburb where healthy lawns were already in place when the occupants took possession of their new homes. The new homeowners were given pamphlets and flyers about the importance of maintaining a perfect lawn, with tips about how to keep it green, lush, and weed-free.

The Levittown homes were designed to be relatively cheap and were amazingly popular, with over 17,000 of the homes being built in sprawling cookie-cutter suburbs, which ultimately set the standard for other such developments across the United States. Levitt himself stated,

No single feature of a suburban residential community contributes as much to the charm and beauty of the individual home and the locality as well-kept lawns.

The original Levittown community (which when it debuted saw over 30,000 people touring the model homes on the first weekend alone) and those that followed were so popular that they ended up having a national effect on the United States, with grass lawns becoming the gold standard of suburbia in general, as it is to this day.  And the rest, as they say, is history.