This Day in History: March 12th 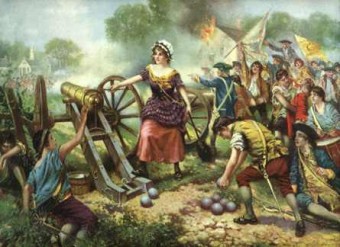 On this day in 1776, a public notice ran in the local newspapers in Baltimore, Maryland acknowledging the large contribution being made by women to the Revolutionary cause. The notice proclaimed:

The necessity of taking all imaginable care of those who may happen to be wounded in the country’s cause, urges us to address our humane ladies, to lend us their kind assistance in furnishing us with linen rags and old sheeting, for bandages.

Posted bills appeared all over town that evening that read:  “Our country’s cause for liberty includes us all.”

Women were aiding the cause with their nursing skills, but that was hardly their only contribution. The boycotts the colonists enacted in protest against British taxation seemed to involve products purchased mostly by women at the time, such as tea and cloth.

Women ran the farms and businesses while their husbands were off fighting the Brits, and even participated in battle themselves when the need arose. The legendary Molly Pitcher fought by her spouse’s side at Valley Forge, and helped fire the cannon when he collapsed.

All over the colonies women were sacrificing their safety, security, comfort, and sometimes their lives, to aid in the birth of their new country.

Abigail Adams gave voice to the concerns of many American women when she wrote to her husband, John, during the Continental Congress later in 1776. She told him that she hoped to see a declaration of independence, and added:

“…by the way, in the new code of laws which I suppose it will be necessary for you to make, I desire you would remember the ladies and be more generous and favorable to them than your ancestors.”

Of course, the newly formed United States of America had no intention of putting women on an equal footing with men; it was an idea that was absurd at the time. Even in 1848 when the first women’s rights convention in the U.S. met, organized by Elizabeth Cady Stanton and Lucretia Mott, when Stanton suggested they should try to get the right to vote, Mott herself stated about this, “Why Lizzie, thee will make us ridiculous.” It wasn’t until 1920 that the 19th amendment was ratified, which states, “The right of citizens of the United States to vote are not be denied or abridged by the United States or by any state on account of sex.”

Keeping all this in mind, you couldn’t blame the “humane ladies” if they suspected they were the inspiration behind the saying “No good deed goes unpunished.” 😉