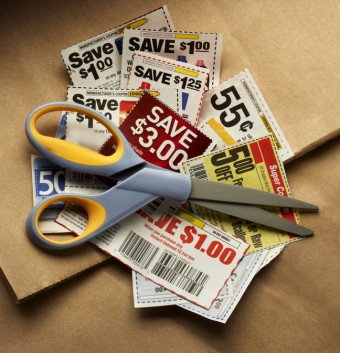 Depending on where you live, you may have noticed that coupons have small print stating they are worth some fraction of a penny, usually something like 1/100th or 1/20th of a penny.

In truth, the coupons really are worth this and if you wanted, you could redeem them for their cash value. Of course, you’d need a large quantity of them to even reach a penny’s worth. This goes up even more if you’re interested in making a profit as you’ll often need to mail the coupons in to redeem the value, depending on the company issuing the coupon.

So why are they worth anything at all? This stems back to the days of trading stamp collecting. For those not familiar, the trading stamp system was a fairly brilliant customer loyalty program used by various businesses starting around the 1890s in the United States and later spreading to other countries. In exchange for spending some dollar amount, a business would give out otherwise worthless stamps and stamp books that they had purchased from certain stamp companies. The more you spent, the more stamps you’d get.

Humans are a funny lot and even if nothing else was given, this collecting system would have had a tangible effect on customer loyalty. But to up the incentive for caring about how many stamps you acquired, you could trade in your stamps to the stamp companies for various “freebies,” depending on how many stamps you had. In the early days, discounts on gasoline were an extremely popular “freebie” with customers, as with many customer loyalty programs today.

This wasn’t costing businesses much of anything as they, of course, incorporated the cost of the stamps into the prices they were selling their products for. Further, you’d have to collect a pretty large amount of stamps to get anything of real value.

For instance, an article in a 1904 edition of the New York Times indicated that you’d typically get about 1/3 of a penny per stamp (about 8.33 cents today), in terms of the price of the thing you traded your stamps for.  How much would you have to spend to acquire a stamp at this time? This varied from company to company, but in general you could expect to spend 10 cents per stamp (about $2.52 today).

Eventually, the fact that trading stamps had no set dollar value, other than perhaps the minuscule value of the raw material the stamps were printed on -essentially nothing then -led to legislation in the early twentieth century requiring that the stamps themselves be given some monetary value. This way, if customers chose, instead of trading them in for some product, they could simply cash them in for money.

Limits were set on the minimum value allowed per stamp, and most trading stamp companies went ahead and assigned that value to their stamps to keep people opting for trading in stamps for products, that these companies bought in bulk at a great discount from the retail prices. This minimum cash value was around 1/3 to 1/4 what you could usually get for trading the stamps in for some product, so exceptionally few people traded the stamps in for money.

What does this have to do with coupons? In certain regions, the law governing the old trading stamp system also applies to physical coupons given to customers. Thus, in those regions, coupons also need to have some monetary value.

Today, the Association of Coupon Professionals claims that in the United States only three states still require a monetary value be given to coupons: Washington, Indiana, and Utah. However, as many large business chains don’t want to print different coupons for different regions -and knowing that almost no one is going to bother to try to cash the coupons in for their monetary value -they simply give coupons a tiny monetary value based on the minimum limit they can get away with.