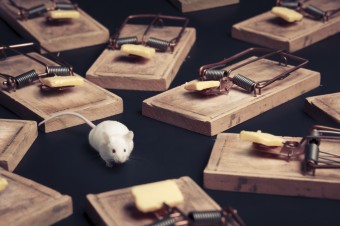 It turns out this has nothing to do with the mammaries of the fairer sex, but rather has its origins in the Spanish word “bobo,” meaning “stupid,” “fool,” or “naïve.” This Spanish word in turn comes from the Latin “balbus” meaning “stammering”, which to the Romans was thought to be a sign of stupidity.

So, essentially, a “booby trap” is a trap that “boobies,” or idiots, are the victims of. Around the same time this first popped up, we also had expressions like “booby prize,” meaning a prize given to a fool. These prizes were usually something completely valueless and often given to the loser of some competition, with the first instance of this appearing in the late nineteenth century.

In the early days, “booby traps” were just simple pranks. As you might expect, the first known instances of this applied to school boys pulling pranks on one another, with the victim then being considered a booby or fool.

For instance, one of the earliest known instances of “booby trap” appeared in the 1868 Chambers Journal where it stated:

A ‘booby-trap’ – it consisted … of books, boots, etc., balanced on the top of a door, which was left ajar, so that the first incomer got a solid shower-bath.

Fast-forward about a half a century and booby traps got a lot more deadly with the WWI usage of calling deadly explosive traps by this name.

You might at this point be wondering where the word “boobies” as referring to breasts came from. It’s generally thought that “boobs” referring to breasts doesn’t have anything to do with the above meanings of things like “stupid.”  Rather, it’s thought that the word in this sense ultimately derived from the Latin “puppa,” meaning “little girl.”  This, in turn, gave rise to “bubbi” in German, then “bubby,” meaning “breast,” in English in the late seventeenth century.

According to the OED, the first instance of “bubby” referring to breasts was in Thomas d’Urfey’s New Collection of Songs and Poems published in 1683 where he states

The Ladies here may without Scandal shew Face or white Bubbies, to each ogling Beau…

As for the transition to “boobies,” according to the OED the first documented instance of this didn’t pop up until the early twentieth century in Henry Miller’s 1934 work Tropic of Cancer where it’s stated,

The first documented instance of the shortened version of boobies, “boobs,” was also courtesy of Henry Miller, this time in his work Sexus which he began writing in 1942 and was published in 1950:

I felt her sloshy boobs joggling me, but I was too intent on pursuing the ramifications of Coleridge’s amazing mind to let her vegetable appendages disturb me…