The Historical Inaccuracies in 300 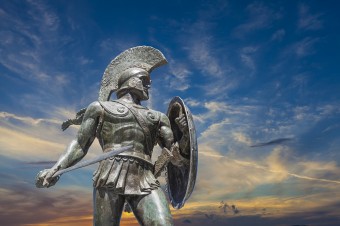 Despite the awesomeness that is the 300 film (and the sequel)- the epic battles, the amazing directing, the incredible cinematography by Zack Snyder, and all the impressive special effects- our mission in this site is very specific, and thus, this article focuses on the historical inaccuracies of this movie.

Identifying some of these historical inaccuracies, starting from Sparta’s then-political system, in the film you can easily see members of the Spartan senate portrayed as unpleasant monsters. Yet, in reality, Sparta’s senate consisted of 30 members who were perfectly respected and accepted by citizens. According to historical records, 28 senate members should have been over 60 years of age and boasting a rich history of contributions and relationships among the most elite circles of the Greek city-state. Two of the aforementioned members were the two kings of Sparta, the only members who could be younger than 60.

This happens to be another major historical inaccuracy of the film, since Sparta has always been known as the only Greek city-state (at the time) with two kings; one went to war and led the army and the other stayed in Sparta to command the state. In this way, the Spartan government and army always stayed disciplined and the king held them under his command.

In regards to Spartan training, the film commits another mistake by showing a young boy hunting in the mountains alone. This contradicts historical evidence showing young warriors always hunted in small groups, enabling them to learn from their youth, how to function in an organized group of warriors, and also minimizing the occurrence of preventable fatal accidents during training.

Zack Snyder also presents Spartans fighting almost naked, wearing only leather underwear and a red cape, most likely inspired by Superman’s outfit (according to Snyder, the movie was more based on Frank Miller and Lynn Varley’s 1998 comic series of the same name, than actual history). In reality, the average Spartan warrior wore many kilograms of war equipment, usually made of iron. As for why the garments Spartan warriors wore over their iron military equipment were red, according to legendary Spartan legislator, Lycurgus, this color simultaneously had a negative effect on the opponent, and helped to hide Spartan warriors’ blood if they were wounded.

One of the film’s most popular scenes is also a product of fiction rather than reality. Xerxes never sent Leonidas any messengers demanding him to surrender, and thus, Leonidas never committed murder by throwing said messenger in the giant pit of death. Herodotus mentions this had happened in the past and, for that reason, Xerxes never sent any messengers to ask the Spartans to surrender.

Another historical inaccuracy consists of the fact that Leonidas appears to have a face-to- face conversation with Xerxes, an event never recorded by Herodotus. Xerxes, as well as the vast majority of Persian characters in the film, are portrayed as evil, blood thirsty, misogynist, and monstrous-looking creatures. In truth, they were recorded as educated and well-trained soldiers having great respect for Greek culture and civilization.

Of course, we couldn’t exclude from this article one of the most famous traitors in history, Ephialtes.

According to Herodotus, Ephialtes, who by the way did not look like a monster, never harbored any intention to join the Spartan (or any Greek) army. Instead, he betrayed his fellow Greeks for money and personal benefit. Unfortunately for him, he didn’t live long to remember his betrayal as Leonidas had wished him in the film. Instead, shortly after his betrayal, Athenades murdered him, an act that the local Spartan authorities later honored and acclaimed.

Last, but not least, we come to the half-blind Spartan soldier named Dilios. Leonidas himself  sent  Dilios back to Sparta before the final battle in Thermopylae, claiming Dilios had a great talent with words and should deliver the “message” of the heroic resistance to everyone in their homeland.

Shortly before the end of the film, Dilios also appears leading the united Greek army at  the battle of Plataea, not just a mere inaccuracy, but also a historical crime, given the leader of the Greek army in this specific battle happened to be one of the greatest generals who has ever lived, Pausanias.

However, in all this mess of historical harassment, there’s a small dose of truth as well.  According to Herodotus, among the 300 Spartans there were indeed two soldiers stricken with an ophthalmic disease and ordered to return home. One of them, Eurytus, returned to Sparta and ordered his helot servant to take him back to the battle once again, where blind and severely wounded, he died heroically next to his king.

The other, Aristodemus, became the only survivor of the 300 since he decided to return home rather than fight under such circumstances.  This decision, however, stigmatized him and his compatriots regarded him as a coward. In fact, Herodotus said of Aristodemus,

No man would give him a light for his fire or speak to him; he was called Aristodemus the Coward.

However, at the Battle of Plataea, Aristodemus redeemed himself by fighting with notable courage and bravery, in this way, gaining the respect and admiration not only of his fellow Spartans, but the rest of the Greeks as well.

In the end, this is yet another example of why you should never, ever look to Hollywood for historical truth or accuracy.  Zack Snyder never promised to educate through this film, since his fascination with the art of comics is already well-known. Instead, he achieved his main goal of impressing cinematographically, and certainly creating a great work of entertainment.

We couldn’t close this article in a better way than letting the writer of the comic, Frank Miller, share his view on the historical accuracy of his creation,

The inaccuracies, almost all of them, are intentional. I took those chest plates and leather skirts off of them for a reason. I wanted these guys to move and I wanted ’em to look good. I knocked their helmets off a fair amount, partly so you can recognize who the characters are. Spartans, in full regalia, were almost indistinguishable except at a very close angle. Another liberty I took was, they all had plumes, but I only gave a plume to Leonidas, to make him stand out and identify him as a king. I was looking for more an evocation than a history lesson. The best result I can hope for is that if the movie excites someone, they’ll go explore the histories themselves. Because the histories are endlessly fascinating.