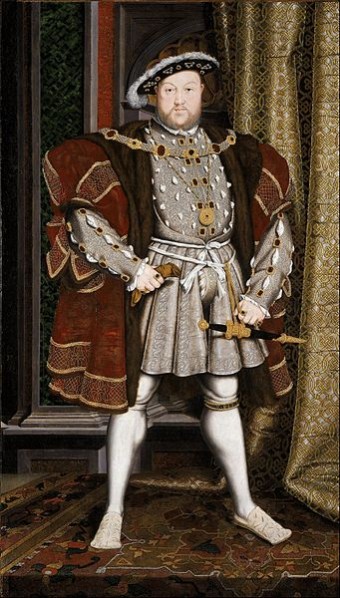 Today I found out about the first three wives of King Henry VIII: Catherine of Aragon, Anne Boleyn, and Jane Seymour.

“Divorced, beheaded, died, divorced, beheaded, survived,” as the old rhyme goes. King Henry VIII is known for having a huge number of wives and getting rid of nearly all of them in some way or another. As most people know, he was desperate for a son and like most people during that time period believed that the woman in question was the determining factor for the particular gender of any babies.

Henry’s first and longest marriage was to Catherine of Aragon. Catherine was the youngest surviving child of King Ferdinand and Queen Isabella of Spain, who you probably know as the monarchs who gave the green light to Columbus to “sail the ocean blue.” (By the way, just to debunk the common myth about the whole flat-earth thing, Columbus and pretty much everyone else in his era knew good and well the earth was round.) In any event, the future queen of England was born in 1485, and was engaged at the tender age of 3—not to King Henry VIII, but to his older brother, Arthur.

You might not have heard of Arthur, because despite being his father’s heir, he never became king. Catherine arrived on English shores at the age of 16 after a turbulent journey from Spain, and was wed to Arthur just one month later. Unfortunately, Arthur died just six months after that, likely from the “sweating sickness,” leaving behind a young widow with a huge dowry. 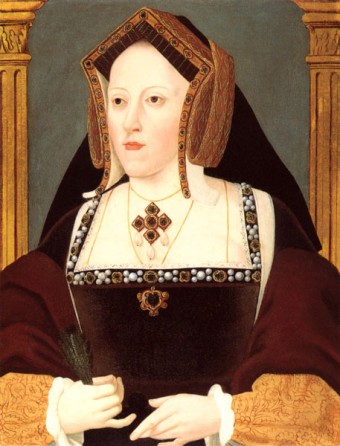 King Henry VII didn’t have much interest in paying the dowry back to Ferdinand and Isabella, so he arranged for Catherine to marry his younger son and new heir, Henry. The pair couldn’t be married right away—being just 11 years old Henry was not yet old enough; there was a quarrel between the British and Spanish monarchs over the dowry; and eventually Henry VII lost interest in an alliance with Spain and forced his son to denounce the engagement. However, shortly after his father’s death in 1509, Henry VIII declared that he would marry Catherine anyway.

The marriage took place on June 11, 1509. On June 23, the pair was crowned. The couple was reportedly happy for their first decade of marriage. During jousting tournaments, Henry would lay trophies at Catherine’s feet. He also wrote to her father, saying:

The bond between us is now so strict that all our interests are common, and the love I bear to Katherine is such that if I were still free, I would choose her in preference to all others.

However, the two had a duty that they had trouble fulfilling: creating the “heir and the spare.”

Catherine had little trouble conceiving, but keeping the pregnancy was another matter. Her first child, a girl, was born prematurely and did not survive. Her second pregnancy produced a healthy son, called Henry, but he died when he was just 52 days old. Another miscarriage followed, then the birth of another son who died after just a few days. Finally, Catherine gave birth to a girl named Mary, who would survive into adulthood. There are two more recorded miscarriages after Mary’s birth.

The lack of a living son frustrated Henry, and his happy marriage began to disintegrate. He took several mistresses and, by 1526, became very interested in one of Queen Catherine’s lady’s maids. Catherine was now over 40 years old and the likelihood of her being able to produce healthy heirs at this point seemed slim to none. So, Henry plotted to annul the marriage.

Catherine’s first marriage to Henry’s brother Arthur ended up being the marriage’s undoing. Henry claimed that the marriage had been cursed because they had gone against the biblical teaching that a man should never marry his brother’s widow.

And if a man shall take his brother’s wife, it is an unclean thing: he hath uncovered his brother’s nakedness; they shall be childless. -Leviticus 20:21

The Pope, however, refused to annul the marriage; Henry was forced to declare himself the head of the English church, and the Archbishop of Canterbury legitimized the divorce in 1533.

Catherine was forced to move away from court and her daughter. She spent her last few years in a series of dark, dank castles where she spent most of her time praying. She died in1536, denying until her dying day that she was no longer queen; in her last letter to Henry, written on her deathbed, she signed it “Catherine the Queen.” 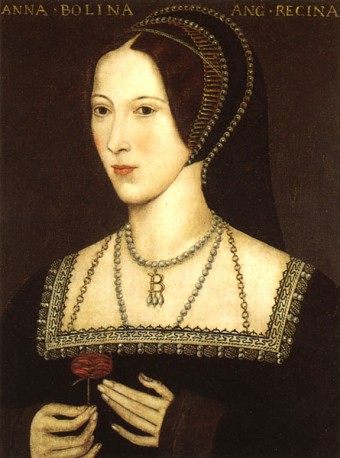 Arguably the most well-known of King Henry’s wives, Anne Boleyn was born sometime in the early 1500s—between 1501 and 1509. She spent a large portion of her adolescence in France, caring first for Queen Mary (Henry VIII’s younger sister), and then Queen Claude.

Anne returned to England in 1522 to attend to Queen Catherine of Aragon as one of her lady’s maids. At this point, Anne’s family was most likely already known to the king—Anne’s older sister, Mary, was one of King Henry VIII’s mistresses. Her family was given gifts and titles for their daughter’s “service,” and it was widely speculated that Mary’s two children were the product of the affair, though Henry never recognized them.

In 1526, it became less about Mary as Henry took notice of the younger sister. Anne was not portrayed as a great beauty—there are accounts of her having six fingers on one hand and a large amount of moles and warts, though these claims are unfounded. She was, however, extremely intelligent and witty, and had a “mysterious” sort of beauty that historians believe Henry found intriguing.

However, being the intelligent girl that she was, Anne knew that mistresses could easily fall out of favour. While Henry pursued her, she largely threw off his advances and claimed she would never be his mistress—she wanted to be Queen. Henry, of course, was still married to Catherine at the time and it was impossible for him to marry again. That was when his lack of son, combined with Anne’s allure, caused him to pursue the divorce from his first wife.

It took six years, during which Henry showed Anne more and more favour. He showered her with gifts and let her take positions of honour at ceremonies. However, Anne remained unpopular with the people of England themselves. By December 1532, she was pregnant by Henry despite previously denying his advances, and the matter of annulment became the king’s top priority.

To ensure that the child Anne carried was legitimate, Henry and Anne married in a secret ceremony in January 1533, while Henry was still legally married to Catherine. Henry argued that his first marriage had “never existed in his mind” so he was free to marry whomever he wanted.

The marriage to Catherine dissolved on May 23. On June 1, Anne was crowned Queen of England in an elaborate ceremony.

By the end of August, Anne retired to her rooms to prepare to give birth to her baby. Everyone was so certain that it was going to be a boy, names had already been decided on and a proclamation of the child’s birth had already been written up using the word “prince.” As you probably know, it was not a prince at all but a girl named Elizabeth who was born on September 7.

While the princess was still celebrated, Anne knew that her position as queen was not secure until she had given birth to a healthy son. If she could overthrow Catherine on those grounds, then King Henry could just as easily get rid of her in favor of another. Anne became pregnant again shortly after Elizabeth’s birth, but miscarried. She miscarried again the next year—this time, the child was a boy, and Anne was distraught.

Anne had made a lot of enemies at court, and they started to plot and conspire against her. She was arrested in 1536 and brought in front of court on charges of adultery, incest, and plotting to murder the King. She was, as you probably already know, found guilty and sentenced to beheading.

Interestingly, shortly before the sentence was carried out on May 19, 1536, her marriage to King Henry was annulled, and he claimed that he had never been legally married to her. Because of this, it would have been impossible to commit the crimes she was about to be executed for, but this little discrepancy was overlooked. Anne’s head was removed during a private execution with one quick and clean stroke of a sword. 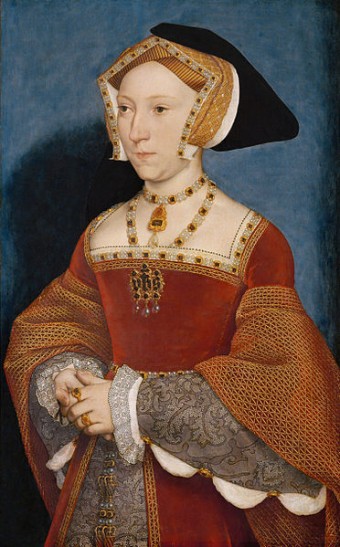 Jane Seymour, born in 1508 or 1509, knew exactly what she was getting herself into when she allowed herself to be wooed by King Henry. She had arrived at court to act as a lady’s maid for Queen Catherine and later waited on Anne Boleyn. A descendant of King Edward III, Jane was a member of a wealthy family but didn’t have much in the way of an education—likely an appealing contrast to Anne.

Henry’s affection for Jane developed shortly after the birth of Elizabeth, and it was this attraction—combined with Anne’s inability to produce a male heir—that sparked Anne’s conviction and execution. Henry and Jane were married just 11 days after Anne’s death.

Jane was never officially crowned queen, and it’s speculated that Henry was waiting for her to produce a son before taking that step. Indeed, when Jane finally became pregnant in 1537, Henry doted on her and provided every comfort she could wish for—he even claimed that Jane was his first “true wife,” despite, if you’ll remember, the decade of happy marriage he experienced with Catherine, who he “would choose… in preference to all others.”

The death of Henry Fitzroy just two months after Henry VIII married Jane probably had something to do with his affection. Henry Fitzroy was Henry VIII’s bastard son from an earlier mistress. If Henry never had a legitimate son, it was always a possibility to get his bastard legitimized and secure his lineage. With Fitzroy’s death, Jane became Henry’s only hope.

On October 12, 1537, Jane was likely extremely relieved to learn that she had given birth to a son, having seen what happened to women who produced only daughters. Jane was able to attend little Edward’s christening, but she died on October 24 from complications with the birth.

Henry, ecstatic about the birth of a legitimate son, was deeply saddened to lose his “one true wife” who might have given him many more sons had she survived. He had Jane buried in a tomb that was being prepared for himself, and she became the only one of his six wives to be buried with him.