February 24, 2014 Daven Hiskey
This is an excerpt from our new book: The Wise Book of Whys, available in: Print | Kindle | Nook | Audiobook 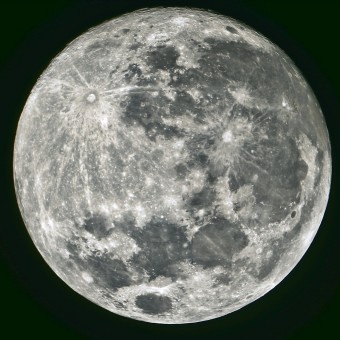 One Moon “day” is approximately 29 1/2 Earth days. This rotation coincides with its orbit around the Earth so that we only see about 59% of the surface of the Moon from Earth. When the Moon first formed, its rotational speed and orbit were very different than they are now. Over time, the Earth’s gravitational field gradually slowed the Moon’s rotation until the orbital period and the rotational speed stabilized, making one side of the Moon always face the Earth.

How does this work? Simply put -tidal friction. For a slightly less simple explanation, we’ll have to put our science caps on. But stick with it; it’s fascinating. I promise.

To start, think of how the Moon causes major tides on the Earth due to the Moon pulling at the Earth via its gravitational field. The Earth has this same effect on the Moon and, being 81.28 times more massive, the effect is much more powerful.

This combination essentially stretches the Earth and Moon, creating tidal bulges on both celestial bodies. This occurs on both sides of each, with the bulge on the sides closest together from gravity and on the sides farthest away from inertia. In the latter case, the matter is less affected by the gravitational force with inertia dominating in this instance. To put it another way, the matter is trying to move in a straight line away from the Earth and the gravitational forces here aren’t as strongly able to overcome this, which creates the bulge on that side.

So back before the Moon was tidally locked with the Earth, the bulge on the side of the Moon nearest to Earth ended up slightly leading thanks to friction and the fact that the Moon rotated faster than its orbital period around the Earth. So with this slightly leading bulge being offset from the line of gravitational pull between the Moon and Earth, this created a torque, which overtime resulted in the Moon’s rotation slowing until it became tidally locked with the Earth; thus, only one side faces the Earth. (Note: the bulge on the far side of the Moon had the opposite effect, but the bulge closest to the Earth dominated the interaction.)

You’ll note, though, that I said we actually get to see about 59% of the surface of the Moon from Earth, not 50%. The discrepancy comes from the fact that the Moon’s orbit around the Earth isn’t perfectly circular, more of an ellipse. As the Moon’s distance from the Earth increases and decreases, its angular speed changes, while its rotational speed stays the same. The result is that we get to see an extra 9% of its surface than we would if it had a perfectly circular orbit.

The other side of this, as you may have guessed, is that the Moon has the same effect on the Earth and is gradually slowing the Earth’s rotation in the exact same way the Moon became tidally locked with the Earth. Further, as the Moon slows the Earth’s rotation, a small portion of the Earth’s rotational momentum gets transferred to the Moon’s orbital momentum, with the result being that the average radius of the Moon’s orbit increases at about 3.8 centimeters per year with the current continental positions and barring major geological events. (Contrary to what you’ll often read, the Moon isn’t getting all the energy here, most of it is being converted to heat via friction, with only an estimated 3% of the energy in the interaction being “stolen” by the Moon.)

Thus, the distance between the Moon and the Earth changes gradually and is more or less in step with the rotational period change. It should be noted, though, that it’s not a constant change as things like major earthquakes, glacial changes, continental drift, and other such geological events play a role here, which is why leap seconds aren’t added at regular intervals, but only when needed. But the overall effect is that over time, the Moon is getting farther and farther away from the Earth every year, while the Earth’s rotation is slowing down.

In theory, at some point tens of billions of years from now (with the exact timeframe being extremely difficult to nail down due to so many unknowable factors) the same side of the Earth will always face the Moon, with the Earth only rotating once per lunar cycle, which at that point most estimates indicate should be about 47 current Earth days long.

“In theory”… but this will likely never happen. Why? In about 1 to 2 billion years or so, the Sun’s brightness will have increased sufficiently to vaporize all water on the surface of the Earth, getting rid of the ocean tides altogether, which is a huge factor in this interaction. However, there still would be some bulging of the Earth’s crust to continue the process to a much lesser extent.

In 5 to 6 billion years, the Sun will be around the peak of its Red Giant phase, and according to the latest models, even with the Sun losing quite a bit of mass during this process, thus making the Earth’s orbit farther out, the Sun should just barely consume the Earth and Moon many billions of years before such a dual tidal lock can occur.

Bottom line, at some point in the next billion years or so, humans will need to either find another home, or figure out how to manually move our current one to a farther out orbit, keeping Earth in the habitable zone of our solar system.