The Pope Who Wrote a Popular Romance Novel 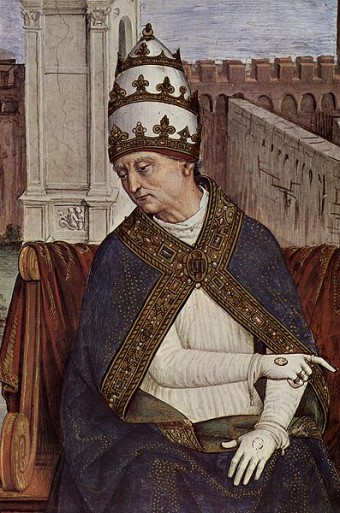 Today I found out about Pope Pius II, who wrote a popular romance novel called The Tale of Two Lovers.

Pope Pius II was born Enea Silvio Piccolomini near Siena, Italy in 1405, one of 18 children. His family was part of the Italian aristocracy, but they had fallen into poverty.

Once the future Pope was old enough, he went to university and then began work as a teacher, before becoming a secretary to Cardinal Domenico Capranica in 1431. He was later a follower of the Antipope Felix V and was excommunicated for siding with a man who went against the real Pope’s wishes.

Shortly after one of his illegitimate children died, he joined the court of the Emperor Frederick III as an imperial poet and private secretary to the Emperor in 1442.

Two years later, the future Pope wrote The Tale of Two Lovers. Historians believe he might have written other books and manuscripts with similar subject matter, and in addition to the novel, a romantic comedy has been attributed to him.

Whatever the case,  The Tale of Two Lovers is about a man who falls in love with a married woman. The two exchange letters, and their correspondence makes up a bulk of the book, making it one of the first examples of an epistolary novel.

As an example of the type of content within the book, Pius wrote:

Now Sigismund, though advanced in years, was quick to passion; he took great pleasure in the company of women, and loved feminine caresses. Indeed he liked nothing better than the presence of great ladies. So when he saw these, he leaped from his horse, and they received him with outstretched hands. Then, turning to his companions, he said: ‘Have you ever seen women like these: For my part, I cannot say whether their faces are human or angelic. Surely they are from heaven.’

In his later years, Pius II looked back on his past with some regret. Writing to a friend, he said,

I know what you will say: why, how strait-laced Aeneas is; now he writes to me of chastity from Vienna, but in Neustadt be spoke otherwise. I don’t deny it, dearest John, but time slips away, day by day; we are older, the day of our death draws near, and now we must consider not how to live, but how to die… For me, John, I have sinned enough, and too much. Now I know myself, and may it not be too late. For now I am forty, and the day of salvation, the time for repentance is at hand…

Pius II attempted to suppress the Tale of Two Lovers, not wanting the transgressions of his pre-Pope days to catch up with him, but the book proved to be too popular. However, he was a prolific writer, and many of his other writings eclipsed the Tale of Two Lovers, at least in the eyes of the church. His Commentaries was published by a distant relative long after his death, along with his autobiography written in the third person. In addition, he wrote about historical events as well as political, religious, and ethical issues of his time, which have proven to be invaluable resources about the time period in which he lived.

If you’re wondering how someone with a background frowned upon within the Catholic church made it all the way to its highest office, Pius II made his way from sinner to Pontificate through a remarkably rapid set of promotions. These were partially the result of the fact that he was well liked among his peers and also genuinely excelled at tasks given to him, despite his perhaps less than ideal morals by the church’s standards.

His rapid rise began after being made a representative in Frankfurt.  After breaking off his friendship with the Antipope in 1445, he was absolved of his excommunication. In 1446, he was ordained as a priest. He then helped to resolve issues between the German princes and the Pope, and for his efforts was made a bishop in 1447.  Thanks partially to a recommendation from his former employer, Emperor Frederick III, a little over a decade after the removal of his excommunication, he was made a cardinal.

While he was Pope, his attention was focused on developing a crusade against the Turks, who had invaded Constantinople. He even went so far as to implore King Mehmet II to convert from Islam to Christianity. This effort ultimately failed.  As morale waned with the crusaders, Pope Pius II traveled to join them, but ended up falling ill and dying shortly thereafter on August, 14, 1464.