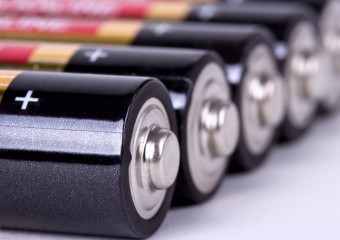 Fourteen cm in height and eight around, the world’s first battery looked more like primitive pre-Columbian art than an amazing piece of ancient technology. Although most experts agree that the device produced electricity, there is little consensus on what that power was intended to do.

Archaeologists searching for “evidence of Biblical tales like the Tree of knowledge and Noah’s flood,” at Khujut Rabu near Baghdad, Iraq, found the device in June 1936. Essentially an oval ceramic jar, it contained: 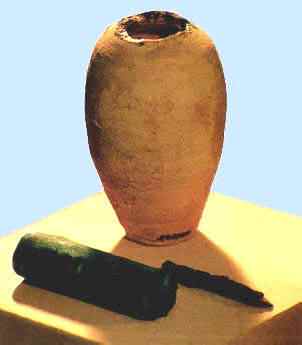 A 9.8 cm long, 2.6 cm diameter tube formed of rolled and soldered copper sheet, affixed by means of asphalt. The tube was closed at the bottom with a copper disk sealed and covered with a 0.3 cm layer of asphalt. Down the axis of the copper tube a [7.5 cm long] iron rod was suspended from the . . . asphalt plug [that sealed the 3.3 cm opening]. . . . Both copper and iron projected above the asphalt plug. [i]

Although there is now some dispute over who actually created what has come to be known as the Baghdad battery, initially:

In 1938, the device was given close scrutiny for the first time by the Director of the Iran Antiquities Department Wilhelm Konig:

Konig searched the archaeological literature and identified some previous finds that appeared to be of the same kind. Small devices stuffed with papyrus and associated with iron and bronze needles turned up in excavations [including]. . . six sealed ceramic jars containing rolls of metal or metal nails [were found]. At different sites, wirelike bronze or iron rods were also found associated with the devices.

Today, most sources still date the Baghdad battery to around 200 BC, during the Parthian heyday, although many argue that the archaeological record shows little evidence of scientific or technological achievement among the warlike Parthians.

Rather, a number of experts, including some from the British Museum, place the battery’s origins with a later culture, the Sassanian (225-640 AD), in part because many similar “devices . . . [were] found in what appeared to be a magician’s house,” near Seleucia-on-Tigris and dating to the Sassanian period.[ii]

Although early on some disputed the battery theory, subsequent examination of the Baghdad find has shown that “battery” is the most plausible explanation:

The asphalt seal indicates the presence of liquid, and almost all available liquids . . . were acidic [and, therefore, would conduct electricity]. The presence of dissimilar metals in an acid generates a potential difference [voltage] and . . . the otherwise useless 0.3 cm asphalt layer on the bottom would serve to prevent the possible shorting of the iron rod to the copper bottom. Asphalt is an inert, water-resistant insulator. [iii]

In addition to the liquid-tight seal, the Baghdad battery “showed signs of corrosion, and early tests revealed that an acidic agent, such as vinegar or wine, had been present.”

The archaeological record is silent as to the purpose and uses these early batteries were put. As a result, researchers have had to develop theories based on their knowledge of the people who created them.

Director Konig suggested early on that “a series of such cells [batteries] connected together with the wirelike metal rods would provide enough power for electroplating” or gilding (transferring a thin layer of a precious metal onto another surface).

In 1978, the director of the Roemer and Pelizaeus Museum, Dr. Arne Eggebrecht, supposedly successfully electroplated using this method; however, neither “any written documentation” nor photographic evidence of this experiment exists.

There is little objective evidence to support the electroplating theory. First, the battery was not very powerful, and in fact models of the Baghdad battery have only produced 0.5 volts, one-third of the voltage in a AAA alkaline battery. [iv]

The process of electroplating is sufficiently complex that it was unlikely to be discovered accidentally. . . . [Also] there is an insurmountable practical difficulty . . . it was not possible to make an aquaeous solution of gold or silver in antiquity [a necessary part of electroplating]. . . . Furthermore, there were simple and effective methods of plating gold on silver or copper . . . available from Sumrerian times . . . . [v]

In addition, as one researcher noted, “It is also problematic that no electroplated objects were found in the excavations at Khujut Rabou’a.”

A number of people have suggested the batteries were used to provide pain relief:

Seleucia was on the trade routes which connected Rome with India and China via the Silk Road. The Greco-Roman practice of therapy using electric rays was known from the work of physicians like Scribonius Largus. Acupuncture was already a standard Chinese medical practice. And Mesopotamian medical tradition emphasized the use of drugs, . . .[Some] suggest that Parthian medical practitioners brought together these three elements . . . [I]f the current of the Parthian cells was applied subcutaneously, using iron or bronze needles as they are used in acupuncture, then contemporary medical research suggests that local analgesia could be produced with very low voltages.

A third suggestion is that magicians and priests used the batteries to induce awe, as many think the Egyptians did with the Hero’s engine. For example, were a “cluster of batteries” placed in an idol:

Anyone touching this statute may have received a tiny but noticeable electric shock . . . . The statue of a god could be wired up and then the priest would ask you questions. If you gave the wrong answer, you’d touch the statute and would get a minor shock along with perhaps a small mysterious blue flash of light. Get the answer right, and the . . . priest could [give] no shock . . . . the person would be convinced of the power of the statue, priest and the religion.