This Day in History: February 14th 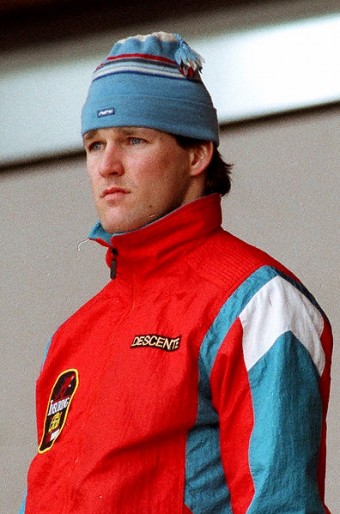 22-year-old speed skater Dan Jansen was widely favored to take the gold in both the 500- and 1,000 meter events at the Calgary Winter Games in 1988. If he hadn’t suffered a tragic personal loss just hours before the first competition, events may have played out quite differently for the young Olympian.

The day that Jansen was set to compete in the 500-meter race started with a phone call from his brother Mike. He was calling from their 27-year-old sister Jane Bere’s hospital room back home in Wisconsin. Jane was dying from leukemia, and wanted to hear Dan’s voice one time before she passed away.

Dan made it clear to his sister that he was ready and willing to come home and be with her – Olympics be damned. But Jane, who was on a respirator and couldn’t speak, made it quite clear nonverbally that she wanted her kid brother to stay in Calgary and compete. He reluctantly agreed, asked Mike to give Jane a kiss from him, and said goodbye to his sister for the last time.

Three hours later, Dan got the message that Jane had passed away.

He asked the members of his family who accompanied him to Calgary if they felt he should still stay and participate. They all encouraged him to skate as planned and just do the best he could. Jansen agreed to soldier on, but felt from the get-go something was “off.”

His premonition was correct. In the 500-meter race, he made a false start, a rare occurrence for Jansen, and then he slipped coming around the first turn. He hit the foam boards that lined the rink so hard he landed back on the ice in a standing position. Spectators could see the reality of his situation hit Dan as he lifted his arms and face to the sky, almost in supplication. Skater Natalie Grenier, his fiancé, came out on the ice to comfort Dan, who was obviously dazed and heartbroken.

Four years later, Jensen made another run for Olympic gold in Albertville. While not the overwhelming favorite to win that he was back in 1988, he was still the 500-meter World Cup Champ and a force to be reckoned with. But once again, he was denied medal status. A minor stumble kept him in fourth place, and he finished a “meh” 26th in the 1,000-meter competition a few days later.

Dan took one last shot in Lillehammer, Norway in 1994. He came bearing impressive credentials once again: World Cup Champ, and he had also set a new record in the 500-meter event. All well and good, but in the 500-meter race, which took place six years to day after his sister Jane died, he wobbled on a turn, causing him to come in eighth.

This put Dan in a precarious position, as the 1,000-meter event was not his forte, and he knew this was his last chance to get the gold.

The day of the race, Jansen shot off from the line like a blur. By the 600 meter mark he was on a record-setting pace. He briefly staggered at one point giving his supporters a collective coronary, but quickly righted himself. When Dan crossed the finish line, not only had he won his first Olympic gold medal, he’d also set a new world record in the event, coming in at 1:12.43.

As the crowd went wild in Lillehammer and all over the world, he waved heavenward to his big sister, and took his victory lap with his eight-month-old daughter, Jane, in his arms.