The Origin of the English Names of Colors 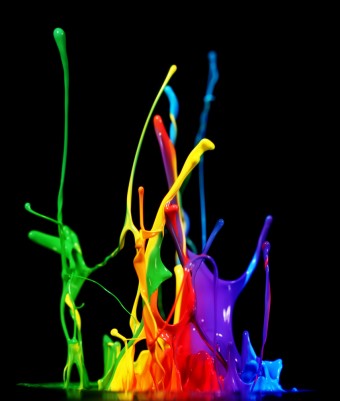 Dating back centuries, the names of our everyday colors have origins in the earliest known languages. According to linguists:

There was a time when there were no color-names as such . . .  and that not very remote in many cases, when the present color-words were terms that could be used in describing quite different qualities [including] gay, lively, smart, dashy, loud, gaudy . . . dull, dead, dreary . . . tarnished, stained, spotted, dirty, smeared . . . faint, faded [and feeble].

As different societies developed names for colors, across the globe, isolated cultures went about naming the colors, but weirdly, they all generally did it in the same order. Called the hierarchy of color names, the order was generally (with a few exceptions): black, white, red, green, yellow, and blue with others like brown, purple and pink coming at various times afterward.

Recent research in this area has demonstrated that this hierarchy matches humans reaction to different frequencies in the visible spectrum; that is, the stronger our reaction to that color’s frequency, the earlier it was named in the culture; or as Vittorio Loreto et al. put it:

The color spectrum clearly exists at a physical level of wavelengths, humans tend to react most saliently to certain parts of this spectrum often selecting exemplars for them, and finally comes the process of linguistic color naming, which adheres to universal patterns resulting in a neat hierarchy…

So, like other cultures, English words for the colors generally followed that same pattern, with black and white coming first, and purple, orange and pink coming last.

The Parents of Modern English

Although a number of the languages discussed in this article are self-explanatory, these three benefit from a brief description:

Proto-Indo-European (PIE) – Known as the common ancestor of all of the Indo-European (Europe, India, Iran and Anatolia) languages, it was spoken up to, perhaps, the 3rd or 4th millennium BC.

Proto-Germanic – A child of the PIE, Proto-Germanic (2000 BC-500 BC) was an ancestor of the Saxon, English, German (duh), Norse, Norwegian, Dutch, Danish, Icelandic, Faroese, Swedish, Gothic and Vandalic languages.

Old English – This early form of English, also sometimes called Anglo-Saxon, was used in England and Scotland from about 400 AD-1100 AD.

In addition, many of the words from these and other early languages are only assumed to have existed. In the study of the origin of words (etymology) these “presumed words” are generally marked with an asterisk (*). For convenience, they are referred to as “written” although it is doubtful that they ever were.

Black derives from words invariably meaning the color black, as well as dark, ink and “to burn.”

Originally meaning, burning, blazing, glowing and shining, in PIE it was *bhleg. This was changed to *blakkaz in Proto-Germanic, to blaken in Dutch and blaec, in Old English. This last word, blaec, also meant ink, as did blak (Old Saxon) and black (Swedish).

White began its life in PIE as *kwintos and meant simply white or bright. This had changed to *khwitz in Proto-Germanic, and later languages transformed it into hvitr (Old Norse), hwit (Old Saxon) and wit (Dutch). By the time Old English developed, the word was kwit.

In PIE, red was *reudh and meant red and ruddy. In Proto-Germanic, red was *rauthaz, and in its derivative languages raudr (Old Norse), rod (Old Saxon) and rØd (Danish). In Old English, it was written read.

Meaning grow in PIE, it was *ghre. Subsequent languages wrote it grene (Old Frisian), graenn (Old Norse) and grown (Dutch). In Old English, it was grene and meant the color green as well as young and immature.

Thousands of years ago, yellow was considered to be closely related to green, and in PIE it was *ghel and meant both yellow and green. In Proto-Germanic, the word was *gelwaz. Subsequent incarnations of German had the word as gulr (Old Norse), gel (Middle High German) and gelo (Old High German). As late as Old English, yellow was written geolu and geolwe

Blue was also often confused with yellow back in the day. The PIE word was *bhle-was and meant “light-colored, blue, blond yellow” and had its root as bhel which meant to shine. In Proto-Germanic, the word was *blaewaz, and in Old English, it was blaw.

English also gets some of its words from French, and blue is one of them. In Old French (one of the vulgar Latin dialects whose height was between the 9th and 13th centuries AD) blue was written bleu and blew and meant a variety of things including the color blue.

Derived from the Old Germanic for either or both a dark color and a shining darkness (brunoz and bruna), brown is a recent addition to our language. In Old English it was brun or brune, and its earliest known writing was in about 1000 AD.

This word also skipped the PIE and seems to have sprung up in the 9th century AD, in Old English as purpul. Burrowed from the Latin word purpura, purple originally meant alternately, “purple color, purple-dyed cloak, purple dye . . . a shellfish from which purple was made . . . [and] splendid attire generally.”

This color’s name derives from the Sanskrit word for the fruit naranga. (Yes, the color orange was named after the fruit, not the other way around). This transformed into the Arabic and Persian naranj, and by the time of Old French to pomme d’orenge. It was originally recorded in English as the name of the color in 1512.  Before then, the English speaking world referred to the orange color as geoluhread, which literally translates to “yellow-red.”

One of the most recent colors to gain a name, pink was first recorded as describing the “pale rose color” in 1733. In the 16th century, pink was the common named to describe a plant whose petals had a variety of colors (Dianthus), and it originally may have come from a Dutch word of the same spelling that meant small.

On the origin of the hierarchy of color names