The Man-Eating Lions of Tsavo 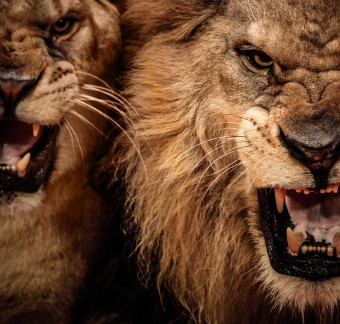 Today I found out about the man-eaters of Tsavo.

In 1898, the British were in the process of building a railway bridge over the Tsavo River in Tsavo, Kenya. Over the next nine to ten months, the Indian railway workers hired by the British, as well as native Africans in the area, were terrorized by two lions. At the time, reports estimated that the two lions had killed up to 135 people in less than a year.

We all know that not all lions are as cuddly as Simba or Christian, but they don’t typically hunt men, either. A lion’s diet usually consists of wildebeasts, zebras, and other large prey. Attacks on humans aren’t unheard of, but humans are usually more of a threat to lions due to our technology and superior weapons.

According to the workers, the lions would stalk through the camp at night and drag people from their tents, run off with them, and have a nice dinner. The lions were both male, though they didn’t yet have manes (in fact, lions in the region are known for being “mane-less”).

One worker described the attacks as particularly brutal: “Hundreds of men fell victims to these savage creatures, whose very jaws were steeped in blood. Bones, flesh, skin and blood, they devoured all, and left not a trace behind them.”

In December of 1898, both lions were shot and killed by Lt. Col. John Henry Patterson, who was overseeing the bridge-building project. The first was killed with two shots, while the second required nine bullets before it finally fell. Both of the lions were skinned and spent 25 years on Patterson’s floor as rugs. However, he eventually sold both of the skins to the Field Museum in Chicago for $5000 (about $68,000 in 2013), where they were reconstructed, stuffed, and remain on exhibit today.

The lions’ exploits and their eventual demise became legend, and Patterson became famous for ending it all. He even wrote a book about his adventures titled The Man-Eaters of Tsavo, published in 1907. It was later the basis for a handful of different movies.

All that said, the railroad company only ever acknowledged that 28 workers, all Indian nationals,  had been killed by the lions—a far cry from the 135 people that Patterson led everyone to believe. The exact number of deaths has been a matter of dispute for some time. However, recent research backs the railroad’s story.

The results were compared to DNA from modern Tsavo lions, human samples collected in 1929 in East Africa, and various “normal” prey, such as zebras and wildebeasts. The scientists discovered that both lions had indeed incorporated humans into their diet in their last nine months of life. However, they found that one lion had only eaten about 11 humans, while the other had eaten roughly 24. Both supplemented their diet with herbivores.

The numbers are only estimates, but according to the study, we can say with about 95% accuracy that the lions ate between 4 and 76 people during that nine month time period. With this new research and the railroad company’s figure of 28 deaths- and even factoring in that the lions may have killed some humans that the railroad company knew nothing about- Patterson’s figure seems to be grossly exaggerated.

As you might imagine, it’s thought that he probably gave an exaggerated number to make the whole ordeal seem more spectacular and make himself look good for killing both of the lions and putting an end to their reign of terror.

As to why the lions were feasting on humans at all, there are several different theories. First, the Tsavo River bridge building was taking place in the midst of climate change that had decimated populations of the lions’ preferred food. It’s possible that they had to search for a new food source and found the human workers an easy target. Second, the lion who ate the most people had some severe injuries, including a broken tooth and misaligned jaw. Injured lions have been known to go after people in the past, probably because we’re slower and easier to catch.