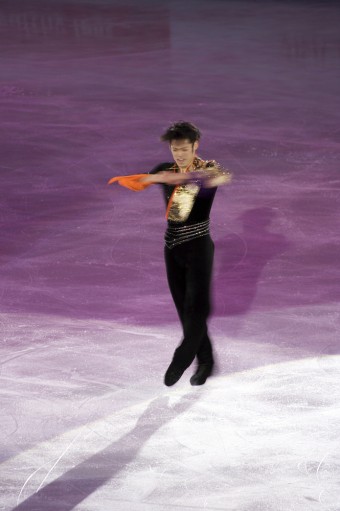 To understand why, it’s important to know why people get dizzy in the first place. Dizziness is controlled by the vestibular system in your upper inner ear. Within the vestibular system, there are three canals that contain fluid called endolymph, as well as sensory nerve cells that look sort of like little hairs. When you move your head, the endolymph resists change in motion and lags behind, stimulating the nerve cells. Those cells send messages to the brain, telling it which way the head moved.

Now, when you spin, the endolymph lags behind at first, but then moves at the same rate that you’re spinning around. When you stop, the endolymph resists change in motion again, and keeps going for a while. This sends a message to your brain that your head is still spinning even if it isn’t, resulting in the dizzy feeling. The endolymph slows down eventually, making you feel normal again.

Dancers and figure skaters have captivated audiences by spinning around and around on a fixed point. Afterwards, they’ll often leap straight into another move. Part of the reason this is so interesting to the people watching is that many people can’t understand how they could possibly remain standing without so much as a wobble after spinning around so much, let alone leaping into another move. Don’t they get dizzy?

Dancers tend to get around this problem by keeping their eyes locked on a fixed point and whipping their heads around when their neck can’t turn any more. The result? While the rest of their bodies are spinning, their eyes trick the brain into feeling like they’re standing still. In this case, the endolymph doesn’t have a chance to move around and alert the nerve cells to tell the brain that the head is spinning.

So, the same principle should apply to figure skaters too, right?

With the help of the ice, figure skaters are able to spin at much greater speeds than dancers can, which means this method isn’t really safe to practice in these high speed rotations. They will stare at a fixed point at the end of each spin move, but they typically don’t whip their heads around continually during it, as this could cause injury to their necks at the rotational speeds they achieve. Because of this, they aren’t easily able to trick their brain as well into thinking the head isn’t moving at all.

So how do they do it after these high speed spins? The answer is the somewhat anti-climactic, but perhaps more impressive, “they just get used to it.” Figure skaters do typically get a little dizzy, but a lot of training means they are usually able to ignore the sensation and carry on as normal, without the audience ever noticing.

The beginner figure skater will start off doing just one or two rotations per spin and slowly work up to more. They also start out with “easier” spins before trying out the more dizzying variations. With years of practice, they are able to work past the sensation of dizziness so that it doesn’t upset their routine. While you might have trouble walking in a straight line after a few spins, they have trained themselves to essentially “fake it.”

Oh, you definitely get dizzy, but your body learns to build a tolerance for it. It’s like when you go upside down on a really fast roller coaster, you’re going too quickly to realize you’re upside down. So I guess, when you’re going so fast that everything’s a blur, you don’t get as dizzy as if you are spinning more slowly and see specific objects going by, if that makes any sense.

There are tricks other than “spotting” that coaches will teach their pupils as well. Breathing exercises between rotations in the early stages of training help the figure skaters regain control after spinning. In addition, at the end of a long spin, some figure skaters will incorporate a dance move into their routine before a jump, which requires more balance. The dance move not only masks their temporary dizziness, but also provides a short reprieve, allowing their endolymph to settle back down.

So, when you’re watching the winter Olympics, watch out for those figure skaters’ dance moves after a big spin—they’re probably dizzier than you think!