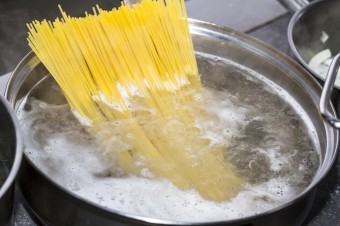 Today I found out why pasta causes boiling water to froth.

We’ve all done it: you put the pasta on to boil, turn your back for a few minutes to wipe off the counter or read the newest Today I Found Out article, and suddenly you hear that foreboding hissing sound of water boiling over. (Perhaps if you simply subscribed to our Daily Knowledge YouTube Channel and been listening instead, you’d have avoided this issue.  You really have only yourself to blame. ;-))

So why does it happen? It has everything to do with the composition of pasta. Pasta is made from flour, water, and sometimes egg—that means it’s basically just starch and protein rolled out into different shapes and dried. It’s the starch molecules that are important. Once they’re heated in a moist environment—like your pot of water—the starch will absorb more and more water until it finally bursts. That sends little starch molecules into your water, resulting in white foam.

It’s the foam layer on top that causes the problems. What has happened is the starch makes the bubbles that were already there more stretchy and pliable, so it takes longer for them to burst. A lot of bubbles on the surface doesn’t allow for proper ventilation of steam, meaning the pot of boiling water becomes superheated if the pot isn’t stirred or the frothy layer skimmed off the top in time. The trapped steam causes the frothy bubbles to expand and pop up, resulting in boiling-hot pasta water all over your stove if you’re not careful.

How can you stop the water from boiling over? Here are a few tips that should get you through your next pasta meal boil-over free: