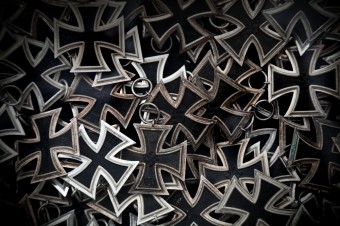 On July 8, 1945, two months to the day after the Allies declared victory in Europe, 29 German POWs were shot while peacefully residing in a prison camp in Salina, Utah.

Described as “slight, dark-haired,” Private Bertucci had spent eight months in 1944 stationed in England. During leave from that posting, taken at the family home in New Orleans, Bertucci is said to have written, “live & let live” on a doorsill.

An unverified report holds that, at some point, Private Bertucci had told others: “Someday I will get my Germans.”

From 1944 to 1945, in addition to thousands of Italian prisoners of war, Utah was home to 8,000 German POWs. In July 1945, over 200 were sent to work the harvest around Salina. Accounts vary as to whether the German soldiers had originally served in the Wehrmacht, Waffen-SS or as part of Rommel’s Afrika Korps.

Waiting repatriation back to Germany, few of the POWs were committed Nazis and nearly all were well behaved. Of the 29 wounded or killed by Bertucci, all were between the ages of 24 and 48.

Due to limited space, POWs were housed in tents, 43 of which were scattered across the grounds at the time of the shooting.

Near Fort Douglas, the camp was an undesirable posting, and often was manned by inferior soldiers:

Guarding the prisoners was a not a popular duty for the soldiers stationed at the camps. Due to low morale and the general poor quality of training that the guards were provided discipline was a continuing problem. . . . Many of the guards were described as being of low mentality, non-intellectual, (who) could neither understand nor see the reason for the Geneva Convention. Many drank and went AWOL. . . . They liked to think of themselves as heroes, their one desire being to “shoot a Kraut.”

Prior to taking up his post in one of the three guard towers that night, Private Bertucci had spent his evening drinking in town, and at some point, had promised a waitress that “‘something exciting’ would happen that night”

Returning for his midnight guard duty, Bertucci was left alone with a regulation issue, mounted Browning .30 caliber machine gun. Waiting until those soldiers he replaced had found cover, Bertucci loaded the weapon with a 250-round ammunition belt that was kept in the tower, and began firing. Methodically sweeping the automatic weapon across the 43 tents, it took only 30 seconds for Bertucci to exhaust the belt. When his commanding officer hailed him, Bertucci is quoted as saying: “Send up more ammo! I’m not done yet!”

When the smoke cleared:

Nine POWs were killed. The wounded were taken to the Salina hospital where it’s remembered that blood flowed out the front door. One prisoner, nearly cut in half, would survive six hours.

Bertucci demonstrated no remorse. According to the Piqua Daily Call, the private said he had been tempted several times to “turn the tower gun on the prisoners and was ‘not at all’ sorry for what he had done.”

Desperate to sweep the matter under the rug, and “despite the absence of any real evidence of mental impairment, Clarence Bertucci was declared insane by a military panel at Busnell Army Hospital and sent to a New York mental hospital.” It is not known how long he remained institutionalized and little is known about what happened to him after his incarceration. He died in 1969.

The German dead were buried in Fort Douglas Cemetery with military honors, although no German was spoken or sung; “Taps” was played.

After the wounded recovered, they were repatriated to Germany.

In 1988, the German Air Force refurbished a memorial statute in Fort Douglas to honor “the deceased prisoners and all victims of despotic governments around the world.”

Convention Relative to the Treatment of Prisoners of War (1929)

German POWs and the American Homefront

Shooting Adds Tragedy to History of POWs in Utah