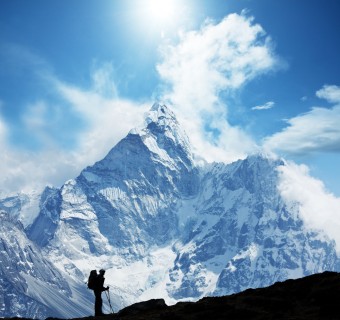 Today I found out how the Himalayas formed.

Millions of years ago, these mountain peaks didn’t exist. The Asian continent was mostly intact, but India was an island floating off the coast of Australia. Around 220 million years ago, around the time that Pangea was breaking apart, India started to move northwards. It travelled some 6,000 kilometres before it finally collided with Asia around 40 to 50 million years ago. Then, part of the Indian landmass began to go beneath the Asian one, moving the Asian landmass up, which resulted in the rise of the Himalayas. It’s thought that India’s coastline was denser and more firmly attached to the seabed, which is why Asia’s softer soil was pushed up rather than the other way around.

The mountain range grew very rapidly in comparison to most mountain ranges, and it’s actually still growing today. Mount Everest and its fellows actually grow by approximately a net of about a centimetre or so every year. That’s in comparison to the Appalachian Mountains, which developed some 300 million years ago or more, which is actually decreasing in peak elevations as it erodes.

The continued growth in the Himalayas is likely due to the Indian tectonic plate still moving slowly but surely northward. We know the plate is still moving in part because of the frequent earthquakes in the region.

Now, if you do the math, you’d find that if the Himalayas had been growing at the current rate for 40 million years, they should be about 400 km tall! Once the infrastructure was in place, this would have given us a much cheaper way to put things into low Earth orbit and beyond. (For reference, the International Space Station typically orbits at between 300 km to 400 km.)

So what happened? In part, the rate of vertical growth has varied over time, including in favor of more horizontal growth. And, of course, gravity and erosion having limited the mountains’ growth significantly.

India merging into Asia became the accepted theory about how the Himalayas were formed around 1912. That’s when Alfred Wegener, a German meteorologist, came up with the “Theory of Continental Drift” which gave us our first ideas about Pangea, tectonic plates, and the thought that continents were moving away from or closer to each other.

What does the future for the Himalayas look like? Undoubtedly, the mountains will continue to grow, though at the same time eroding too; but the net is expected to continue to grow as the Indian tectonic plate doesn’t look like it’s going to slow down any time soon. That means more earthquakes and, over time, slightly taller mountains to climb.