This Day in History: December 27th 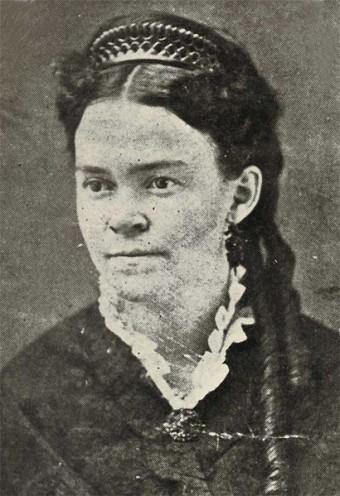 Carry Nation’s vendetta against alcohol was personal. In 1867 at the age of 22, she married a physician by the name of Charles Gloyd, who, like so many of that era, turned out to have a serious drinking problem. Their marriage produced a child, but Charles’s alcoholism made him unable to provide for his family. Carry left him because of his drinking, and he died six months later.

In 1877, Carry married David Nation. They eventually settled in Medicine Lodge, Kansas, where David became pastor of the Christian Church. Carry formed a local chapter of the Women’s Christian Temperance Union, and began to experience religious visions and feel a sense of divine purpose.

Kansas had voted for prohibition in 1880, but for the most part saloon owners ignored the law and continued to run their businesses openly. This did not sit well with Carry, who considered herself “a bulldog running along at the feet of Jesus, barking at what he doesn’t like,” and felt it her Christian duty to do what she could to put a stop to it.

In fact, she claimed it was directly from God that her soon-to-be smashing ways came about. As she put it:

The next morning I was awakened by a voice which seemed to me speaking in my heart, these words, “GO TO KIOWA,” and my hands were lifted and thrown down and the words, “I’LL STAND BY YOU.” The words, “Go to Kiowa,” were spoken in a murmuring, musical tone, low and soft, but “I’ll stand by you,” was very clear, positive and emphatic. I was impressed with a great inspiration, the interpretation was very plain, it was this: “Take something in your hands, and throw at these places in Kiowa and smash them.

She began by throwing rocks, bricks and other projectiles at the saloons. Finally, Carry picked up a hatchet and entered one. Her first outright smash-up was in Wichita, Kansas on this day in history, 1900, causing several thousand dollars in damages. It also landed her in a jail cell.

This didn’t stop Carry. Between 1900 and 1910, she was arrested on at least 30 occasions after she and her followers vandalized one barroom after another, as Carry would goad them on by crying, “smash, ladies, smash!”  One can only imagine the hilarity of the situation.  You’re sitting there chatting with your friends over a cold brew, when suddenly a hoard of hatchet wielding women charge into the place and begin smashing everything in sight. 🙂

Of course, Carry was six feet tall and 180 pounds, and was no shrinking violet. Wielding her hatchet, she was as intimidating as one of the Furies. It is said that prizefighter John L. Sullivan ran and hid himself when Carry came banging through the doors of his New York City saloon. Carry had nothing but contempt for the people who indulged in alcohol, referring to them as “”rum-soaked, whiskey-swilled, saturn-faced rummies.”

Carry took her show on the road, even smashing up saloons where alcohol was legal, and sold hatchet pins as a way to pay her legal fees. She was an eloquent and powerful orator by all accounts, and even her enemies conceded that she was incredibly successful at enforcing existing prohibition laws and spreading the WTCU’s message.

By 1910 Carry was in poor health, and completed her last speaking tour that year. She died in 1911, never seeing the passage of the 18th amendment which she was so instrumental in paving the way for.

Of course, humans being humans, when we’re told we can’t do something, we tend to want to do it more…  and that’s exactly what happened.  After the ban on selling, transporting, or distributing alcohol in the United States, the rate of consumption of alcoholic beverages increased by an estimated three times the rate it was before the banning took effect.  And, of course, all the world’s ill’s, which had long been blamed on rampant alcoholism, weren’t solved by prohibition; so maybe it’s best that this hatchet wielding woman didn’t live to see her life’s work turn out to be slightly less than fruitful in terms of what she was shooting for- to get people to stop drinking.