The Parasitic Sacculina That Bends Its Host to Its Own Will 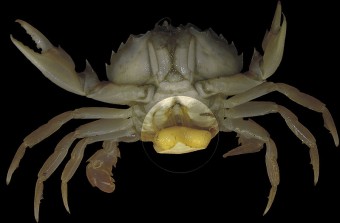 The Sacculina is shown attached to the under side of the crab.

Falling into the category of “you can’t make this up,” is the parasitic barnacle Sacculina. Shedding its hard shell and injecting itself into the body of a host crab, Sacculina becomes its puppet master, preventing the crab from molting, growing, regenerating, digesting and reproducing. Instead, the reprogrammed crab directs all of its energy to nourishing the Sacculina and caring for the parasite’s offspring.

Surprisingly, some are thinking of purposely introducing Sacculina into non-native habitats. Perhaps not as crazy as it sounds, scientists are currently weighing whether Sacculina, as a parasitic castrator, could be used to benefit certain marine ecosystems.

In its larval stage, the female of the species has a hard outer shell, like other barnacle larvae. When she finds her preferred host, the green crab Carcinus maenas, she walks along its body until she locates a joint in the host’s shell. There, Sacculina, unlike other barnacles, sheds her outer shell and injects herself into the crab.

Once inside, from her now slug-like form she develops a root system of tendrils; these filaments extend throughout the crab’s abdomen, taking over its intestine, diverticulae and even surrounding the stomach, allowing Sacculina to suck nourishment from the crab. In addition, other tendrils envelope the crab’s thoracic ganglion (a nerve center), and follow the crab’s nervous system down through its legs and up to and surrounding the cerebral ganglion (the crab equivalent of a brain).

After a few weeks, she develops a sac-like reproductive unit that grows out from the crab’s abdomen near its rear where the crab would otherwise keep its own eggs. There, many tiny male Sacculina in larval form (the males never reach adult maturity) enter the female’s external sac and fertilize her eggs, of which she can make hundreds every day.

After about 6 weeks, the eggs develop into larvae and the reproductive cycle continues. Mature Sacculina can live as long as their hosts, and, therefore, continue to breed for at least one or two years.

More than just getting a free ride, Sacculina takes total control of its host crab. First, the tendrils that have attached to the crab’s nerves emit substances that rework the crab’s endocrine system. Via this mechanism, Sacculina causes the crab’s body to absorb its own Y-organ (the gland that directs the crab to molt or grow), as well as commanding the crab’s androgenic gland (which controls sex differentiation) to degenerate.

With Sacculina in the driver’s seat, not only is the crab unable to molt, grow or regenerate lost limbs, it is also now infertile. To add insult to injury, when Sacculina inhabits a male crab, the endocrine changes wrought by Sacculina feminize him, so that he now resembles (and acts like) a female crab – to the point that he will even do a female mating dance!

Under complete alien control, the infected host of either sex will begin to care for the parasite’s eggs (that rest on the crab’s abdomen where its own eggs would be). When the time is right, the crab acts out its own reproductive cycle by climbing to a high rock and tending to the egg pouch. When the hundreds of eggs are ready to hatch, the crab bobs up and down in the water to release them; he/she then stirs the floating eggs with his/her claw to set them on their way to new hosts, where this cruel cycle will continue.

Sacculina’s territory mimics that of its primary host, the green crab, which is native to the Eastern Atlantic Ocean from Europe through North Africa.

The green crab, however, has become an invasive species, spreading throughout the Atlantic, and even to the Eastern Pacific along the shores of California and Washington. Sacculina has, apparently, not necessarily followed it to all of these new habitats.

As an invasive species, the predatory green crab has wreaked havoc on fisheries on both coasts of the U.S., devouring oysters, mussels and other crabs. To rid themselves of this voracious eating machine, some have suggested introducing Sacculina to disrupt the green crab’s reproductive cycle.

Others are concerned that Sacculina will develop a taste for a variety of crab species, including the desirable and profitable natives fishermen and ecologists are trying to protect; as such, several studies have been done to weigh the efficacy of introducing Sacculina to these overrun fisheries.

Those in favor of introduction of the parasite point to a 1997 Australian experiment where different species of crab were exposed to Sacculina, but only the invasive green crabs were infested by the parasite.

Those against look to a 2000 study where it was determined that “Sacculina carcini [would] infest at least two genera of crabs from a broad geographic distribution.” This conclusion was supported by a 2003 experiment that found that native species suffered infestation rates in the range of 33% to 53%.

Despite these concerning statistics, since the green crab continues to devastate fisheries, as late as 2010 researchers at Duke University were planning new studies to determine if the benefits of introducing the parasite outweigh the costs.

The Devil You Know

Biological control of invasive species, by introducing their natural enemies into the mix, has a long, and some would say successful, history. People frequently use ladybugs and parasitic wasps to keep undesirable aphids in control, while many also employ lacewings and predatory mites to wreak havoc on destructive mealybugs. Yet, introducing a new species to an ecosystem can often create unintended consequences.

For example, in Hawaii, although the introduction of natural enemies to fight invasive species has had an estimated benefit of saving “tens of millions of dollars and reduced pesticide use by many tons annually,” there have been some added costs. For example, the mongoose, introduced to prey on unwanted rat populations, also aggressively hunted, and had a devastating effect on a number of native bird species.

So, this all begs the question: is it better to introduce a powerful, mind-controlling devil to control the green crab (and maybe ruin the population we are trying to protect) or just stick with the devil we know?