Why Can People Live in Hiroshima and Nagasaki Now, But Not Chernobyl?

October 24, 2013 Melissa 82 comments
Olivia asks: Why is it that Chernobyl is still toxic, but there are millions of people living in Hiroshima and Nagasaki without dying? 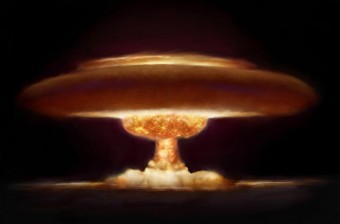 On August 6 and 9, 1945, U.S. airmen dropped the nuclear bombs Little Boy and Fat Man on the Japanese cities of Hiroshima and Nagasaki. On April 26, 1986, the number four reactor at the Chernobyl Nuclear Power Plant in the Ukraine exploded.

Today, over 1.6 million people live and seem to be thriving in Hiroshima and Nagasaki, yet the Chernobyl exclusion zone, a 30 square kilometer area surrounding the plant, remains relatively uninhabited. Here’s why.

Dropped by the Enola Gay on Hiroshima on August 6, 1945, Little Boy was a uranium- fueled bomb about 10 feet long and just over two feet across, that held 140 pounds of uranium and weighed nearly 10,000 pounds.

When he exploded as planned nearly 2000 feet above Hiroshima, about two pounds of uranium underwent nuclear fission as it released nearly 16 kilotons of explosive force. Since Hiroshima was on a plain, Little Boy caused immense damage. Estimates vary but it is believed that approximately 70,000 people were killed and an equal number were injured on that day, and nearly 70% of the city’s buildings were destroyed. Since then, approximately 1,900 people, or about 0.5% of the post-bombing population, are believed to have died from cancers attributable to Little Boy’s radiation release.

Squat and round, Fat Man, so named for its resemblance to Kasper Gutman from The Maltese Falcon, was dropped three days later on the city of Nagasaki on August 9, 1945. About two pounds of Fat Man’s 14 pounds of plutonium fissioned when it detonated about 1,650 feet above Nagasaki, releasing 21 kilotons of explosive force. Because the bomb exploded in a valley, much of the city was protected from the blast. Nonetheless, it is estimated that between 45,000 and 70,000 died immediately, and another 75,000 were injured. No data on subsequent cancer deaths attributable to radiation exposure from the bomb is readily available.

Sadly, Chernobyl was likely preventable and, like other nuclear plant accidents, the result of decision-makers’ hubris and bad policy that encouraged shoddy practice.

The design of the reactors at Chernobyl was significantly flawed. First, it had a “built-in instability.” When it came, this instability created a vicious cycle, where the coolant would decrease while the reactions (and heat) increased; with less and less coolant, it became increasingly difficult to control the reactions. Second, rather than having a top-notch containment structure consisting of a steel liner plate and post-tensioning and conventional steel reinforced concrete, at Chernobyl they only used heavy concrete.

On April 26, 1986, engineers wanted to run a test of how long electrical turbines powered by the reactor would continue operating when the reactor was no longer producing power. To get the experiment to work, they had to disable many of the reactor’s safety systems. This included turning off most automatic safety controls and removing ever more control rods (which absorb neutrons and limit the reaction). In fact by the end of the test, only 6 of the reactor’s 205 control rods remained in the fuel.

As they ran the experiment, less cooling water entered the reactor, and what was there began to turn to steam. As less coolant was available, the reaction increased to dangerous levels. To counteract this, the operators tried to reinsert the remaining control rods. Sadly, the rods also had a design flaw in the graphite tips. This resulted in the displacement of the coolant before the reaction could be brought under control.  In a nutshell, as these tips displaced the coolant, within seconds the reaction actually increased drastically due to the heat, creating even more steam, and thus getting rid of more coolant.

This might have not been so bad had the control rods been able to be inserted fully to perform their function of absorbing neutrons and thus slowing the reaction, except the heat became so intense, that some of the graphite rods fractured, jamming the rods at about one third of the way in.

So, in the end, when the nearly 200 graphite tips were inserted into the fuel, reactivity increased rapidly, rather than slowed as was supposed to happen, and the whole thing blew up. It is estimated that about seven to ten tons of nuclear fuel were released and at least 28 people died directly as a result of the explosion.

It is further estimated that over 90,000 square miles of land was seriously contaminated with the worst effects being felt in Ukraine, Belarus and Russia. However, radiation quickly spread in the wind and affected wide swaths of the northern hemisphere and Europe, including England, Scotland and Wales.

Hard data on the number of people who died as a result of the radioactive release are difficult to find. It is known that of the 100 people exposed to super high radiation levels immediately after the accident, 47 are now deceased. Additionally, it has been reported that thyroid disease skyrocketed in those countries closest to Chernobyl; by 2005, 7,000 cases of thyroid cancer were recorded in Ukraine, Belarus and Russia.

Most experts agree that the areas in the 30 kilometer Chernobyl exclusion zone are terribly contaminated with radioactive isotopes like caesium-137, strontium-90 and iodine-131, and, therefore, are unsafe for human habitation. Yet neither Nagasaki nor Hiroshima suffer these conditions. This difference is attributable to three factors: (1) the Chernobyl reactor had a lot more nuclear fuel; (2) that was much more efficiently used in reactions; and (3) the whole mess exploded at ground level. Consider:

Little Boy had around 140 pounds of uranium, Fat Man contained about 14 pounds of plutonium and reactor number four had about 180 tons of nuclear fuel.

Only about two pounds of Little Boy’s uranium actually reacted. Likewise only about two pounds Fat Man’s plutonium underwent nuclear fission. However, at Chernobyl, at least seven tons of nuclear fuel escaped into the atmosphere; in addition, because the nuclear fuel melted, volatile radioisotopes were released including 100% of its xenon and krypton, 50% of its radioactive iodine and between 20-40% of its cesium.

Both Fat Man and Little Boy were detonated in mid-air, hundreds of feet above the Earth’s surface. As a result, the radioactive debris was taken aloft and dispersed by the mushroom cloud rather than being drilled into the earth. On the other hand, when reactor number four melted down at ground level, the soil underwent neutron activation, where the already active neutrons in the burning fuel reacted with the soil causing it to become radioactive.

Lately, some weird reports have been coming from the Chernobyl Exclusion Zone – wild animals have returned, and, for the most part, they seem fine. Moose, deer, beaver, wild boar, otter, badger, horses, elk, ducks, swans, storks and more are now being hunted by bears, lynx and packs of wolves, all of which look physically normal (but test high for radioactive contamination). In fact, even early effects of mutations in plants, including malformations and even glowing are now mostly limited to the five most-contaminated places.

Although not everyone is ready to agree that Chernobyl is proof that nature can heal herself, scientists agree that studying the unique ecosystem, and how certain species appear to be thriving, has produced data that will ultimately help our understanding of long term radiation effects. For example, wheat seeds taken from the site shortly after the accident produced mutations that continue to this day, yet soybeans grown near the reactor in 2009 seem to have adapted to the higher radiation. Similarly, migrant birds, like barn swallows, seem to struggle more with the radiation in the zone than resident species. As one expert explained, they’re studying the zone’s flora and fauna to learn the answer to a simple question: “Are we more like barn swallows or soybeans?”