The Truth About Julius Caesar and “Caesarean” Sections

Myth: The Caesarean section procedure ultimately derives its name from Julius Caesar, who is often (falsely) claimed to have been the first baby born via Caesarean. 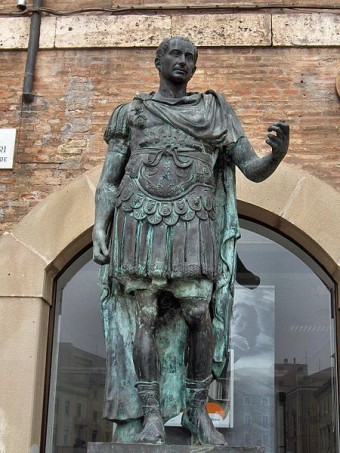 It’s hard to pinpoint where exactly this story started, though a 10th century document is the likely culprit. The Suda, a Byzantine-Greek historical encyclopaedia, is one of the earliest records citing Caesar as the namesake of the Caesarean section, stating,

The emperors of the Romans receive this name from Julius Caesar, who was not born. For when his mother died in the ninth month, they cut her open, took him out, and named him thus; for in the Roman tongue dissection is called ‘Caesar.’

We now know that this account is incorrect on several points. First of all, babies had been cut from their mother’s wombs in numerous cultures long before Caesar was around. In fact, this was actually part of imperial law in Rome known as the Lex Caesaria. The law, established in the time of Numa Pompilius (715-673 BC, well before Caesar’s time), stated that if a pregnant woman died, the baby had to be taken from her womb.

It’s likely that this practice was put into place for religious reasons (so that the baby could be buried separately from its mother), but eventually from this, doctors realized that the baby could be saved; though the mother’s life would almost universally be forfeit until the 19th century if the procedure was done while she lived, which it occasionally was if it was thought the mother was about to die anyways.  (It’s even possible that the Caesarean section got its name from the Lex Caesarea.)

The second point that The Suda gets wrong is on Caesar’s mother- she did not die in childbirth. Aurelia Cotta survived to see her son to adulthood and acted as one of his political advisers. Some historians even believe that she survived him.

As Aurelia did not die in childbirth, it is extremely unlikely that she underwent a Caesarean section. As noted,  at the time, the operation was used as a “last resort” method of trying to save the baby’s life. As far as historians can tell, nearly all- if not all- operations ended in the mother’s death in those days. This was likely due to unsanitary conditions which led to infection, as well as haemorrhaging resulting in too much loss of blood.

In fact, the procedure faced an extremely high mortality rate well into the 19th century and the first known successful C-section—one in which both the mother and child survived—wasn’t performed until the late 16th century in Switzerland.  Funny enough- not performed by any sort of doctor, but by a pig gelder (castrater) who operated on his own wife. However, this instance wasn’t well documented, so take it with a grain of salt. (More on this in the Bonus Facts below)

The first known such successful operation where the mother survived in Britain didn’t occur until the early 1800s and in America just shortly before that.  And even in 1865, the survival rate for a woman having a C-section was only 15%.  So it’s very unlikely that if Aurelia did have a C-section about 1000 years before and survived, that her unique accomplishment slipped through the pages of history unnoticed. That’s not even considering the fact the a C-section wouldn’t have been done until physicians was sure she was going to die anyway.  So she’d have had to dually survive whatever they had thought was going to kill her and then procedure.

Oddly, the Oxford English Dictionary—the authority on word origins and usually remarkably accurate, though I have occasionally found an error or two there over the years (nobody bats a thousand)—seems to back up the claim that Caesar was born via Caesarean, defining the word as: “the delivery of a child by cutting through the walls of the abdomen when delivery cannot take place in the natural way, as was done in the case of Julius Caesar.”

While “Emperor” might seem implied as he was arguably the best known Julius Caesar, Pliny the Elder clears it up for us. He wrote that the name “Caesar” came from the Latin word “to cut” which is “caedere.” He further stated that one of Caesar’s ancestors was born via C-section and was named as such, and that the name was passed down to the Emperor: “the first, too, of the Cæsars was so named, from his having been removed by an incision in his mother’s womb.”

Because of just how amazingly accurate the OED usually is, I’ll give them the benefit of the doubt here and guess they are referring to one of Caesar’s ancestors rather than the famed Emperor. After all, both “Julius” and “Caesar” were family names—  and, indeed, the first to bear the Caesar name in his lineage was named Numerius Julius Caesar.

All that being said, it is possible Caesar’s false association with the name may have contributed to the procedure being called that, but the evidence for this is scant at best, and even if so, it wasn’t the Emperor that was the ultimate origin of the name, but possibly one of his ancestors or from the Lex Caesaria, as stated.

Much more compelling, in my opinion, is the fact that the term for the babies cut from the womb after the mother died was “caesones”.  This seems to be yet another very likely origin for the later “Caesarian Operation” that became “Caesarian Section” in 1598 when Jacques Guillimeau published a book detailing the work of midwives.