No Witches Were Burned During the Salem Witch Trials

Myth: People convicted of witchcraft were burned at the stake during the Salem Witch Trials 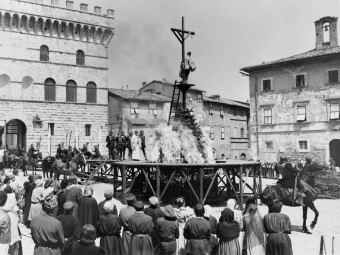 When you think about people disposing of witches a few hundred years ago, you probably imagine a woman tied to a stake jutting up from a pile of smoking wood. The burning of witches has become so ingrained in witch-hunt canon that it’s a cliché. But the truth of the matter is that the burning of people convicted of being witches wasn’t all that common in England. By the time the colonies were set up, English law forbade burning people alive, which meant that no witches could be burned in the American colonies as a result of the trials.

The Salem Witch Trials are probably the most well-known American witch hunt. They took place between 1692 and 1693 in colonial Massachusetts, just as the European witch hunts were winding down. Previous to the European hunts—which started around 1300—the ability to perform “magic” was more accepted. For instance, people would use “magic” to heal others. Of course, if magic could be used for good, it could also be used for evil. This way of thinking set the stage for the Salem Witch Trials.

You see, Salem was going through a rough patch in the years leading up to the hunt. Refugees flooded into the town in 1689 following England’s war with France on American soil. The war displaced many people living in New York, Quebec, and Nova Scotia, and the extra mouths to feed in Salem put a strain on the town’s resources. This, in turn, stretched the division between Salem’s rich and poor, causing heated arguments which the local Puritans blamed on the Devil.  There was also a major feud going on between two major families, the Putnam and the Porter families, the former of which included one of original accusers.  Many in the region sided with one family or the other in the feud, causing tensions to be extremely high.

In January 1692, three young girls began having “fits”—they would scream, mutter strange sounds, bark like dogs when addressed, become unable to concentrate on tasks given, and contort themselves into “impossible” positions. This began occurring after the girls started experimenting with fortune telling to try to figure out how their lives would end up and what their husbands would do for a living. (This sort of thing was quite common at the time, such as one tradition using mistletoe put under one’s pillow at night and then burned the next day.)

One of the girls was Reverend Parris’ daughter, Betty Paris (9 years old), and another was his niece, Abigail Williams (11 years old).  The third was Ann Putnam (12 years old), a member of one of the powerful families involved in the family feud going on in the region.

When prayer didn’t fix the problem, the Reverend called in a doctor who was unable to explain what was causing the fits.  He declared that something supernatural was affecting the girls. In February, the victims of the “devil’s work” confessed to a judge that three women were responsible for giving them fits: Sarah Osborne, Sarah Good, and Tituba, the Parris’ slave.

The women were interrogated, but only Tituba confessed to the crime. All three were later put in prison—not burned at the stake.

Even though the three suspected witches were put away, the people of Salem became paranoid. In a fit of mass hysteria- and probably a dash of simply taking advantage of the situation to get rid of enemies- fingers were being pointed at supposed witches left and right, even for the mildest of offenses. When the hunt ended, some 200 people had been accused of witchcraft. However, only 20 people were executed.

The first to be formally executed was Bridget Bishop. She was perceived as a promiscuous woman and a gossip. (Clearly, she must be a witch!) Though she pleaded innocent, the Special Court of Oyer and Terminer—the court set up to deal with the witch trials—found her guilty. On June 10, 1692 she was hanged on what would become known as Gallows Hill.

Eighteen more women followed in Bishop’s footsteps, swinging on Gallows Hill. Additionally, one elderly man named Giles Corey was pressed to death by heavy stones. Many more people were tried and sent to prison, and several of them died while incarcerated, including Sarah Osborne, one of the first “witches” convicted.

Funny enough, Tituba, who confessed to witchcraft right from the start, was simply let go a year after being imprisoned when someone paid to get her out of jail.

As the Salem Witch Trials demonstrate, the most common way to dispose of a witch was by public hanging. In Britain, witchcraft was considered “a crime against the government and a felony punishable by hanging.” As the American colonies were still under British rule at the time, hanging was how Salem dealt with the witches. Witches were also sometimes beheaded or drowned, and yes, sometimes burned alive in other parts of the world.

It’s likely that burning witches went down in history as the more popular method of execution because of what happened to the witches after they died. Authorities commonly burned the remains of the witch in order to protect themselves and the town against any evil she might wish upon them in death.

Not too long after the Salem Witch Trials, in 1702, the General Court declared that the trials had been unlawful after many of those involved in the convictions confessed that they had made their decisions in error. In 1711, the heirs of the victims were given £600 to ease the blow of losing a loved one, and the victims’ good reputations were restored. It wasn’t until 1957, however, that Massachusetts formally apologized for the events.

As for the original little girls who started the whole thing, one of them, Ann Putnam, later apologized in 1706, stating:

I desire to be humbled before God for that sad and humbling providence that befell my father’s family in the year about ninety-two; that I, then being in my childhood, should, by such a providence of God, be made an instrument for the accusing of several people for grievous crimes, whereby their lives was taken away from them, whom, now I have just grounds and good reason to believe they were innocent persons; and that it was a great delusion of Satan that deceived me in that sad time, whereby I justly fear I have been instrumental, with others, though ignorantly and unwittingly, to bring upon myself and this land the guilt of innocent blood; though, what was said or done by me against any person, I can truly and uprightly say, before God and man, I did it not out of any anger, malice, or ill will to any person, for I had no such thing against one of them; but what I did was ignorantly, being deluded by Satan.

And particularly, as I was a chief instrument of accusing Goodwife Nurse and her two sisters, I desire to lie in the dust, and to be humble for it, in that I was a cause, with others, of so sad a calamity to them and their families; for which cause I desire to lie in the dust, and earnestly beg forgiveness of God, and from all those unto whom I have given just cause of sorrow and offense, whose relations were taken away or accused.