This Day in History: August 30th 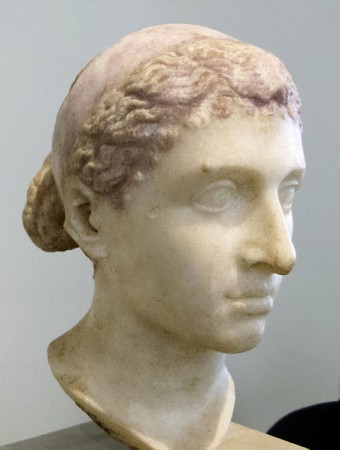 On this day in history, 30 B.C., Queen Cleopatra of Egypt, the iconic seductress and lover of both Julius Caesar and Marc Antony, commits suicide after her forces are crushed by Octavian, who shortly became the first emperor of the Rome.

Cleopatra was born in 69 B.C., and was made queen of Egypt as Queen Cleopatra VII at just 18 years old, along with her brother who was proclaimed King Ptolemy XIII. They ruled as husband and wife… Yes, husband and wife. It didn’t take long for sibling rivalry to erupt, resulting in civil war breaking out 3 years later in 48 B.C.

Rome had its own civil war raging at the time, which spilled over into Egypt after a desperately-seeking-solace Pompey the Great of Rome was murdered on the orders of Ptolemy XIII. Julius Caesar arrived in Alexandria to find the deposed Roman emperor already disposed of, but he decided to hang around and tidy up Egypt while he was already there.

The ever-shrewd Cleopatra saw this as a splendid chance to advance her political aims. Knowing that you never get a second chance to make a first impression, she was presented to Caesar at the royal palace in Alexandria wrapped in a bed covering.  Why a blanket?  According to Plutarch, she had to find some way to smuggle herself into the palace without her brother knowing:

She was at a loss how to get in undiscovered, till she thought of putting herself into the coverlet of a bed and lying at length, whilst Apollodorus tied up the bedding and carried it on his back through the gates to Caesar’s apartment.

Soon after, Caesar sided with Cleopatra in the Egyptian civil war and Ptolemy XIII died in 47 B.C. during an attack from Caesar’s army.

Another brother replaced him as Ptolemy XIV as Egypt’s King and Cleopatra’s “husband.” In the meantime, Cleo and the man who was well over twice her age, Caesar, enjoyed weeks of hot, steamy lovin’ that resulted in Caesar’s only known son, Ptolemy Caesar, commonly known as “Caesarion”, meaning “little Caesar”. (It is thought by a few historians that Brutus, who would take part in the killing of Caesar, may also have been his illegitimate son, though born when Caesar was just 15 years old.)

They lived happily enough in Rome but their happiness was short lived, as Julius Caesar was assassinated in March 44 B.C.  Having been unable to get Caesar to name Ptolemy Caesar as his heir before Caesar’s death (imagine how vastly different history would have been had he agreed), Cleopatra and her son returned to Egypt. Ptolemy XIV died shortly thereafter, probably at the hands of his Queen, and she wasted no time proclaiming her son as her co-ruler.

After Caesar’s death, Rome was ruled by a triumvirate, consisting of Octavian, Caesar’s chosen heir, Marc Antony, a renowned general, and Lepidus, a reputable statesman. As part of his duties, Marc Antony summoned Queen Cleopatra to Tarsus to answer charges that she had assisted enemies of Rome.

Cleopatra figured what had worked for her before would probably work again, so in 41 B.C she appeared to answer her summons costumed as Venus, the sultry goddess of love, on a resplendent river barge. She was right – it worked again. She and Marc Antony spent the entire winter doing it like bunnies, but in 40 B.C. Marc had to return to Rome and marry Octavian’s sister, Octavia the Younger, in an effort to bail water from the sinking ship that was the triumvirate.

It wasn’t long before Cleopatra and Marc Antony reunited in Syria. In their time apart Cleopatra had given birth to twins, and rumors swirled that the couple had secretly married – which was illegal as Romans were not allowed to wed foreigners. A procession through Alexandria where Cleopatra and their children sat upon golden thrones and were given Roman royal titles was enough for an already infuriated Octavian (Antony was married to his sister after all) – who egged on the citizens of Rome to believe that Marc Antony would deliver their empire into foreign hands.

It took a couple more years, but Octavian finally did formally declare war against Cleopatra – which also meant against Antony – in 31 B.C. Octavian’s forces were brilliant and formidable, and after fierce fighting near Greece, Cleopatra and Antony were forced to set course for Egypt. A week later, their weary land troops were also forced to surrender.

It was nearly a year later when Octavian finally reached Alexandria and their final defeat was certain. When that last battle was finally over, Queen Cleopatra went to the mausoleum she had designed for herself to await her fate. Marc Antony had been erroneously informed that she was already dead, so he took his sword and stabbed himself.

As he lay dying, a messenger came informing him Cleopatra was still alive. Antony had himself taken to the mausoleum where Cleopatra was hunkered down and begged her to make amends with Octavian just before he died from his self-inflicted wound.

When the triumphant Roman leader Octavian arrived on the scene, Cleopatra did what had always worked so well for her in the past – she tried to seduce him. Only this time it didn’t work.

Rather than be humiliated by being taken to Rome as a prisoner, Cleopatra took her own life on August 30, 30 B.C., probably by the bite of an asp, which is a highly poisonous serpent, and also a symbol of royalty. Cleopatra always did know how to do things with flair.

If you’re wondering what happened to Caesarian, Octavian, apparently not inclined to spare the life of his predecessor’s only known son, had him captured and killed.  This is particularly significant as Caesarian was the last of about three millennia of Egyptian pharaohs.  Three years later, Octavian became Augustus and founded the Roman Empire.