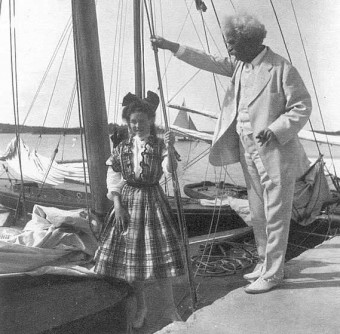 Today I found out that Samuel Clemens (aka, Mark Twain) used to “collect” girls between the ages of 10-16 years old.

On February 12, 1908, Clemens said, “I suppose we are all collectors… As for me, I collect pets: young girls — girls from ten to sixteen years old; girls who are pretty and sweet and naive and innocent — dear young creatures to whom life is a perfect joy and to whom it has brought no wounds, no bitterness, and few tears.”

Okay, so it isn’t actually as creepy as it initially sounds and in some ways is kind of sweet, but Samuel Clemens did love to entertain young girls.  Towards the end of Clemens’ life, he suffered quite a lot of hardship. His daughter, Susy, died in 1896 and his wife, Olivia, passed away in 1904, followed by a second daughter, Jean, in 1909. Clemens fell into a depression in the early 1900s and noted that while he had reached the grandfather stage of life, he had no grandchildren to keep him company. He therefore went about befriending young girls who he treated as surrogate granddaughters.

The girls in question were the daughters of couples who ran in his same social circle. He often met them on boats carting him back and forth to England or Bermuda, as was the case with Helen Allen. Allen was just twelve years old when Clemens stayed with her family in Bermuda. Her father was the American Vice-Council in Bermuda; her grandmother had known Clemens’ wife as a child. Clemens said Allen was “perfect in character, lovely in disposition, and a captivator at sight”- everything that Clemens wanted in his collection of young girls.

The group of girls were called “Angel Fish” or “the Aquarium Club.” The name is derived from the fish that Clemens first saw in Bermuda. He decided on that name because the angelfish “is the most beautiful fish that swims.” Clemens would buy angelfish pins in Bermuda and present them to each of his girls. Out of a dozen or so original pins, at least one is still in existence. It currently resides in the Mark Twain Library in Redding, Connecticut.

So what exactly did a man in his late seventies do with a bunch of teenaged girls? All manner of innocent, grandfatherly things. Clemens invited the girls to concerts, the theatre, and to his own house for card games, billiards, and reading. While in Bermuda, several of his Angel Fish had fun riding in a donkey-pulled cart with him. Clemens initially called his estate “Innocence at Home” in honour of “his girls.” He kept in touch with them by exchanging letters when they couldn’t visit, but always kept a room available and hoped to have an Angel Fish “in it as often as Providence will permit.” Before you get too much of a “Michael Jackson” vibe, it should be noted that the girls were always accompanied by a chaperone; the room for the Angel Fish even had two beds to accommodate a mother or guardian along with a girl.

Besides the room, Clemens’ house also had a billiard room which was refashioned into a sort of shrine to the Angel Fish. Above the door was a sign that said “the Aquarium” and inside the walls were lined with framed photos of each of the Aquarium Club’s members.

As innocent as it all was, if some celebrity tried to do that today, the press would have a field day with it, insinuating all manner of disgusting things, whether there was any evidence of such acts or not. In his day, it wasn’t really much of a scandal, though Clemens’ remaining daughter, Clara, didn’t appreciate the behavior, perhaps being a tad jealous. When she returned to her father’s home from a stint in Europe to find that he had collected a group of young girls to entertain, she made her father change the name of his house to “Stormfield” and stopped the household staff from saving letters from the Angel Fish. (Today the full collection of every surviving letter can be read in Mark Twain’s Aquarium: The Samuel Clemens-Angelfish Correspondence.)

The presence of chaperones probably should have put Clara’s mind at ease, but the letters Clemens wrote to his girls would definitely raise some eyebrows today. Shortly after Dorothy Harvey’s fourteenth birthday, he wrote to tell her “I wish I could have those free-gratis-for-nothing-voyages-&-nothing-to-do-but-look-at-you every day.” To Dorothy Quick, just eleven years old, he wrote after one of her visits, “I went to bed as soon as you departed, there being nothing left to live for after that, & all the sunshine gone. How do you suppose I am going to get along without you?” The letters showed his love and devotion to his girls and the enjoyment he experienced in spending time with them, but today parents would likely have used these letters as evidence in civil lawsuits. 🙂

Despite this, only one relationship ever looked to be somewhat improper, and that wasn’t with one of his Angel Fish; further, the inappropriate overtures didn’t come from Clemens. The girl was Gertrude Natkin. He met her when she was 15 and he was 70 in 1905.  The two exchanged letters and Natkin developed a “school girl crush” on Clemens and went somewhat overboard in expressing her affection for him through her letters. Clemens became concerned about this and distanced himself from her- his letters growing more and more infrequent, because he didn’t want to gain a reputation for impropriety nor encourage her affections, perhaps proving that he saw his Angel Fish as nothing more than granddaughters.  Certainly, at the time, an adult male courting a 15 year old girl wouldn’t have raised eyebrows, particularly if the suitor was well-to-do and not too old.  But at 70, it would have been a scandal even in that time period.

Clemens died on April 21, 1910 of a heart attack, just a few years after establishing the Aquarium Club for his Angel Fish. All in all, there were around a dozen members of the club who visited Clemens regularly until his death, but his enthusiasm for the club waned in the last year of his life; he complained that his girls were growing up too fast, complained about their boyfriends, and cut off one girl when she turned sixteen.  In the end, his fondness for them primarily lying in their innocence, as something of a breath of fresh air in a cynical world, waned as they gradually lost that defining feature of children. 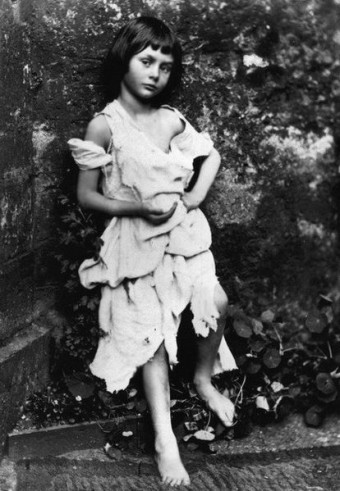