Is Cellulite Different From Regular Fat? 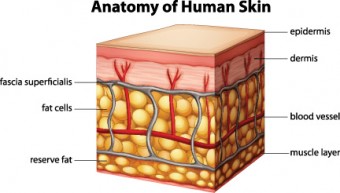 In a sense, yes, but your question is a tad like comparing orange juice to the texture of an orange peel.  While cellulite, also known as gynoid lipodystrophy, is often thought of as fat, that isn’t quite accurate. Fat is just a component of what causes cellulite, so perhaps more aptly cellulite is a possible manifestation of fat. The presence of fat doesn’t mean you have cellulite. Cellulite itself is the result of the overlying skin structure combined with underlying fat cells protruding outwardly, while simultaneously the connective tissue, called septae, hold the skin in place causing a rippled, or orange peel appearance- similar to a leather chair that has large amounts of stuffing pillowing out while buttons hold the leather skin tightly to the internal rigid structure of the chair. 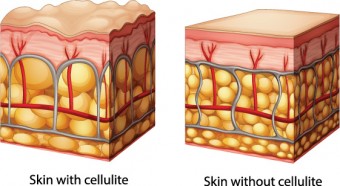 You need a complex set of circumstances to happen simultaneously for cellulite to rear its bumpy head. The common misconception that if you have excessive fat you will inevitably have cellulite is also untrue. You can be a rather obese person and still have no cellulite, particularly if you’re male. So let’s break down these parts and pieces to understand cellulite and how fat affects it.

Fat, or adipose tissue, is a type of loose connective tissue known as a lipid (molecules that contain hydrocarbons helping to make up the structure of cells and aid in their function. Other lipids include oils, waxes, vitamins, and hormones). It is present in a few different forms throughout the body- white fat, brown fat, subcutaneous fat, and visceral fat. “Subcutaneous” vs. “visceral” refer to where in the body it’s located, and white and brown refer to the function (classified by color) of the fat cell itself.

Visceral fat refers to the fat that surrounds your organs in your abdominal cavity. This type of fat is considered by some to be the most dangerous, as in excess it has been linked to an increase in the risk of heart disease, strokes, insulin resistance, increased inflammatory responses and diabetes. On the small positive side, this isn’t the type that causes cellulite.

Subcutaneous fat is the type of fat that lies just beneath the skin. This is the type that you can easily see and causes your bone blanket to jiggle ever-so-nicely on the dance floor. It’s also the type responsible for that orange peel, dimply cellulite that women everywhere fear. As I mentioned before, just the presence of this type of fat doesn’t mean you will get that cellulite appearance.

There is a type of connective tissue underneath your skin that helps connect your dermis (a skin layer) to the underlying tissues, known as fibrous septae. As you age, this septae can become hardened. This can pull on your skin from the inside. There are also two main ways these septae can connect. In women, they have been shown to tend towards a more perpendicular structure. In men, they have been shown to tend towards a 45 degree angle. This difference in the connective structure of some septae, combined with hormone issue we will talk about later, is thought to account for why women are more likely than men to have cellulite.

When a person begins to get excessive subcutaneous fat deposits underneath their skin, the overabundance of adipose tissue begins to fill up the available space leading to it pushing upward on your skin. The septae will hold tight those areas they are attached too. The result is sections of your skin that protrude outward farther than others.

That being said, there are loads of women and men that are extremely overweight and don’t have cellulite, so what gives? As I mentioned before, you need the presence of a few different things acting simultaneously to achieve the wonderful cellulite look.

The chances of you getting cellulite, and the severity of its appearance, revolves around three factors:

These three conditions tend to affect women more than men. Most studies state approximately 90% of women and only 10% of men will get this undulating skin blemish. According to Dr. Lionel Bissoon, author of the book The Cellulite Cure, the reason seems to revolve around decreasing hormone levels as women age. When a women starts approaching menopause (usually when cellulite begins to rear its ugly head) their estrogen levels begin to decrease. Decreasing estrogen levels will cause you to lose receptors in blood vessels and thighs. The result is decreased circulation that tends to cause lower levels of collagen (the protein that gives skin it’s structure) production that leaves the skin thinner. This is also around the same time people tend to get larger amounts of subcutaneous fat, and voila, Cellulite!

You might have heard of several “miracle” treatments concerning how to get rid of cellulite. The truth is, according to Dr. Molly Wanner of Harvard Medical School, to cure cellulite it requires changing the structure of skin and how it works in conjunction with your fat, muscle, and connective tissues. As you can imagine, the only true way to treat it revolves around reduction of the causes. You can decrease the amount of the subcutaneous fat. Treating thickness and elasticity of the dermis will also help. If you’re not afraid of invasive procedures, you can seek treatments involving the dissection of the underlying larger septae.

In the end, fat can exacerbate cellulite, but isn’t the underlying cause of it. Merely a link in this unfortunate chain of circumstances that leads to this generally unwanted blemish.