How the Human Body Generates Electricity 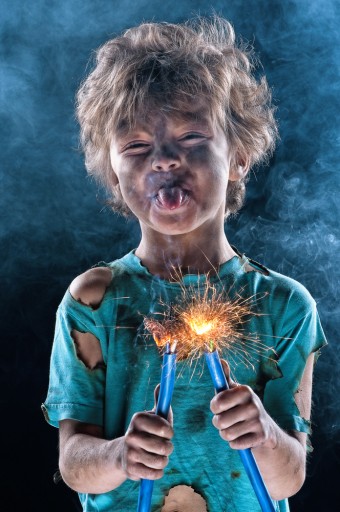 Fantastic question Lee. The shortest and most simple answer is- chemical reactions between different atoms and molecules within the body. If all that seems a bit vague, let me give you the long answer that inherently needs to get a bit “sciency”. O’ how I love long sciency answers, much to the chagrin of certain readers who like to email me complaining about it. (I’m looking at you Bradley H.) 😉

To start with, it’s necessary to explain a bit about what exactly electricity is.  If you already know this, feel free to skip down a couple paragraphs.  If not, read on!

What most people think of as electricity is simply the movement of an electrical charge, or potential. Sometimes known as a secondary energy source or an energy carrier, the electricity that powers everything from our television sets to our cars needs to be created from some energy source. When it comes to electricity, there are countless numbers of sources that can create electrical power. The most common energy sources for mass production are hydro-electric, nuclear, solar and wind. Technological advances have allowed us to harness these energies to give us wonders like dancing robots and smart-phone flashlights.

Each basic element, like the oxygen you breathe, and the sodium and potassium you eat, have a certain number of protons and electrons that will distinguish it from other elements. Most elements have the same number of electrons as they do protons. This will give it a balance between negative and positive charges. Protons reside in the nucleus (center) of the atom while electrons rotate around the nucleus.

An interesting fact about electrons is, the energy they have is restricted to specific levels known as shells. These shells allow for specific spaces between the rotating electron and the center protons- sort of like how planets orbit at different distances from the sun. Since negatively charged electrons are attracted to positively charged protons, the further away from the center of the atom an electron is, the more loosely the electron is held to the nucleus and the easier it is to knock that electron free of it.

Electrons in the outermost shell of an atom, known as the valence shell, are so loosely bound to the nucleus, they can break away rather easily. If you get enough energy to break an electron free and cause it to move in a certain direction, the electron in the valence shell of the adjacent atom will flow to that atom because as we know, in most cases you need an equal electron to proton ratio in an element. These freely flowing electrons are what we’re harnessing from the outside power sources. This is what you are referring to as electricity.

When it comes to the electricity created in the human body, the energy source creating it is chemical. The energy created by chemicals has to do with the composition of the atoms and molecules present. All the elements we take into our bodies, like oxygen, sodium, potassium, calcium, magnesium etc. have a specific electrical charge- meaning they have a specific number of electrons and protons. Different chemicals are made up of different molecules. How those molecules are bound together, and how they react to other molecules near them is how chemicals create such energy.

For a specific example of this sort of thing in action, one of the most commonly mentioned electrical currents created by the body is our heart rhythm. Our hearts contain a grouping of cells that reside in the upper right portion known as your Sinoatrial node or SA node for short. The cells within the SA node (pacemaker of the heart) contain electrolytes both inside and outside the cells. Some of the most common electrolytes within the body, as mentioned previously, are sodium, potassium, calcium, magnesium, phosphorus, and chloride. Sodium and calcium generally reside outside the SA nodes cells and potassium lies within. These specialized cells allow much more sodium to enter the cell than allow for potassium to leave it. The result is a continually growing positive charge. Once that charge reaches a certain point, calcium channels open up in the cell membrane and allow for calcium to enter as well. This makes the interior of the cell extremely positive, known as an action potential. Once that potential reaches a certain point, it has enough “power” to discharge down the nerves of the heart. Ah the wonders of chemistry in action!

Electrolytes crossing cell membranes creating electrical discharges is only one of countless ways the body uses the food we eat to create energy and power to do work. But when you ask how the body creates electricity, the answer is as simple as “chemistry”. While this might not seem like the same electricity that powers the computer you’re using right now, at its core, it really is. The difference is what energy source caused the flow of electrons and how that flow created the reactions it did. So if your eyes didn’t glaze over during this little science tutorial, you now know the long answer to your question. If they did, you know the short answer as well.  Either way, I hoped that helped.