June 21, 2013 Terynn Boulton
F. Morse asks: What is the difference between a horse and a pony? 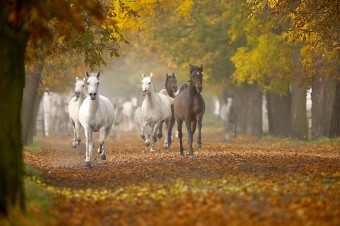 That being said, although the main distinction between the two is size, size is not the only determining factor. There are some horses smaller than a typical pony size that are not ponies but horses. For instance, breeds such as the Falabella horse, which stand no taller than 7.5 hands, are considered very small horses, not ponies.  Further, Caspian horses almost always are under 12 hands, yet  aren’t considered ponies.

What? Why?  In a word, phenotypes.  In more words, the answer lies in their temperament and physical makeup. Ponies are typically much stockier than their horse relatives. They also have thicker manes, tails, and coats, so are better able to endure cold weather. They have proportionally shorter legs, wider barrels (body of the pony that encloses the ribcage and all major internal organs), heavier bones, shorter and thicker necks, and short heads with broader foreheads. They also typically have calmer temperaments and a high level of equine intelligence which can be used to a human handler’s advantage. Children love getting pony rides don’t they?

So that’s it. Horses and ponies are both equines. Size typically determines whether or not they are considered a horse or a pony, but their temperament and other aspects of their physical make-up also count.

Now, you might at this point be wondering what exactly a “hand” is and how horses and ponies are measured.  The height of ponies and horses is measured from the highest point of the withers, which for you non-equestrian connoisseurs is the point where the neck meets the back. The withers is used for measurement since it is a stable part of the anatomy, unlike the head and neck which move up and down with the body of the horse. Their height is measured in hands and inches with one hand equivalent to 4 inches. When written, a pony or horse’s height is written in the number of hands, followed by a decimal and then the number of inches. For instance, if a horse is 61 inches tall, its height would be written as 15.3 h for 15 hands and 3 inches.