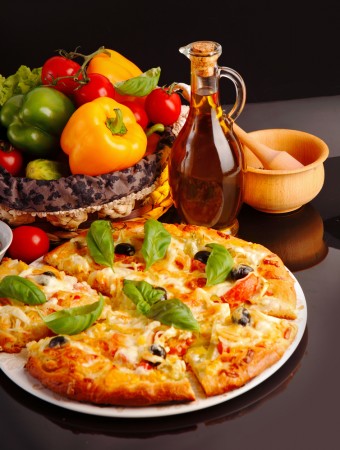 Pizza has become such a staple of the modern diet that certain people, often found in Computer Science labs at 2 a.m. the world over, practically consider it one of the basic food groups. For such a popular food, its origins are difficult to pinpoint, as it all depends on your definition of what pizza is. If you choose to loosely define pizza as flat bread with toppings strewn on it, there is evidence that the Persian army around the 5th and 6th centuries used their shields to cook flat bread in this way out in the field. The soldiers would then cover the bread with things like cheese and dates for a quick meal. Further, it is very likely that people have been putting various toppings like cheese on bread since as long as there has been cheese and bread.  However, many argue that these ancient forms of “pizza” aren’t truly pizza as we think of it. Since those early references are obscure at best, we’ll go with that and talk more about modern pizza.

Mount Vesuvius leveled Pompeii on August 24, 79 A.D. Why is this important when talking about the history of pizza?  Archeologists excavating the site have uncovered flat cakes made of flour that were a popular staple of the diet of the inhabitants in Pompeii and nearby Neopolis, a Greek settlement that later became Naples. Shops were also found in Pompeii that contained equipment and tools that would be consistent with those used in pizzerias. One has to wonder if they also delivered.

As to specific early pizza recipes around this time, we are lucky enough to have the cookbook of Marcus Gavius Apicius, who was more or less the Gordon Ramsay of his time. Legend has it his love of food was so great that when his finances started to dwindle, he committed suicide rather than risk facing dying of hunger. Or, you know, it could have just been that his life was in disarray and he was depressed… Whatever the case, his cook book provides a wealth of information on what cuisine was popular and how it was prepared in first century Rome. It also contains several recipes that instruct the cook to put various ingredients on a flat bread base. One recipe specifically calls for chicken, garlic, cheese, pepper and oil placed on flat bread, which is about as close as you can get to a modern pizza without the now traditional tomato sauce (tomatoes, of course at this point in history were only found in the Americas).

We’ll now take a brief look at the stories behind the individual ingredients of modern pizza, as this gives us additional insight into the history of the finished product, and how and why pizza evolved the way it did.  Flat bread was the norm in antiquity. Bread was used to serve as not only the plate for food, but also as napkins when you were finished, as only the wealthy could afford to own actual tableware and utensils.  Needless to say, using bread as a plate for food, naturally gave rise to pizza, with the word “pizza” even thought by some etymologists to ultimately derive from Medieval Greek “pitta,” meaning “cake” or “pie”.

Next, we come to the cheese. Cheese, of course, is nothing new, having been around for many thousands of years, with the process of making it probably discovered by accident when someone tried storing milk in a container made from a sheep’s stomach or the like. You can read more on this here: The History of Cheese.

By the early 1500s, tomatoes had made their way over from the New World to Europe. The tomato did not receive a warm welcome in its new home; rather, it was greeted with disdain and outright fear – rumors even circulated that tomatoes were poisonous. (A similar thing happened with potatoes, with this tuber not becoming widely popular until some clever tricks and antics used by Frenchman Antoine-Augustine Parmentier in which he managed to convince the masses that potatoes were just fine to eat.) Europeans new to the tomato found its texture questionable to say the least, and thought they looked rotten when ripened. None of this did anything to endear the tomato to the people of Europe.

Not long after, the poor folk of Naples, who only had olive oil, flour, cheese, herbs and lard in their meager pantries, added the demonized tomatoes to their concoction and gave the world the first basic tomato sauce pizza, considered by many to be the birth of the “modern” pizza, known as a “Napoletana” pizza- defined as flat bread topped by tomato sauce and cheese. It wasn’t long before everyone in Italy agreed that Naples boasted the best pizza pies in the whole area. After about a century had passed, eating pizza had become a “must-do” activity for tourists visiting Naples, who would make a point of slumming in the less affluent parts of town to sample this peasant fare whipped up by men called “pizzaioli.”

During the last years of the 19th century, the King and Queen of Italy even summoned the most famous of the pizzaioli to their palace while vacationing in Naples so they could see what all the fuss was about. The pizzaioli, Raffaele Esposito, cooked three different varieties for the royal couple, and the Queen enjoyed the third pizza so much that Her Majesty even sent Esposito a “thank you” note. The pizzaioli in turn dedicated that pizza to the Queen, calling it “Pizza Margherita.” From this moment on, there was no question that Naples was head and shoulders above the rest when it came to pizza.

Italian immigrants brought pizza to America with them at the dawn of the 20th century. The first known official pizzeria in the United States was supposedly opened by a grocer, Gennaro Lombari,  in 1905 in New York City. It wasn’t until the early 1930s that he got around to putting tables and chairs in his establishment, though, and expanding his menu to include spaghetti. By the 1940s, Pizzeria Uno in Chicago introduced deep dish pizza, a pie with a crust that rises at least an inch above the plate to accommodate an amazing number of toppings.

Pizza as a fixture in American pop culture really took off in the 1950s. This is when pizza became widely noticed outside of the Italian-American community. Celebrities such as Joe Di Maggio, Jimmy Durante and Frank Sinatra, who all had Italian roots, were publicly seen enjoying pizza. Beyond this, Harry Warren and Jack Brooks’ 1952 song, sung by Dean Martin on the soundtrack for the 1953 film The Caddy, “That’s Amore”, contained the famous line: “When the moon hits your eye like a big pizza pie – that’s amore”, which did more for the popularity of pizza than a thousand ad campaigns could have done. Pizza soon rivaled the burger as America’s favorite hand-held food.