Before He Was President, JFK Was a Bestselling Author and Won a Pulitzer Prize 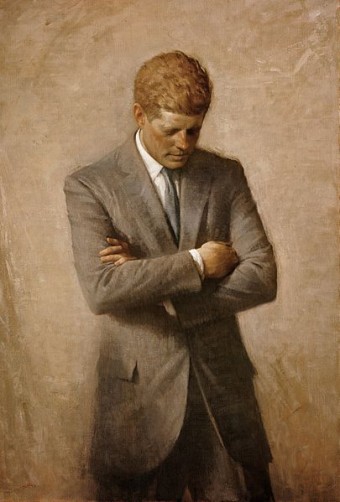 Most remember John Fitzgerald Kennedy as our youthful and inspiring 35th President who, with his elegant wife, turned the White House into Camelot until his assassination in November 1963. But what few today recall is that long before his presidency, JFK was a well-respected author and even won the Pulitzer Prize for history in 1957 with Profiles in Courage.

Born into a wealthy and powerful family, Kennedy’s father had been the Ambassador to the UK in the years leading up to World War II. Kennedy joined his father in Europe in 1938 and 1939, and witnessed first-hand Great Britain’s failed policy of appeasement. Sent home shortly after Britain declared war on Germany in 1939, Kennedy turned his experience into his graduate thesis. Retooled as a book, 1940’s Why England Slept became a bestseller.

In subsequent years, Kennedy became a naval officer and war hero. In 1946, he was elected to the U.S. House of Representatives, and in 1952, the Senate. While in the latter, and recovering from a back operation in 1956, he researched and wrote Profiles in Courage.

Discussing the difficulty of maintaining political integrity in the face of party, personal and constituent pressures, Profiles in Courage, and its message of the need for politicians to strike a balance between conflicting interests in order to effectively govern, remains relevant today:

The fanatics and extremists and even those conscientiously devoted to hard and fast principles are always disappointed at the failure of their Government to rush to implement all of their principles and to denounce those of their opponents. But the legislator has some responsibility to conciliate those opposing forces within his state and party and to represent them in the larger clash of interests on the national level; and he alone knows that there are few if any issues where all the truth and all the right and all the angels are on one side.

Kennedy goes on to argue that, far from being spineless lapdogs, many politicians who conciliate, and whose voting “evolves,” demonstrate a unique and necessary form of courage:

Some of my colleagues who are criticized today for lack of forthright principles – or who are looked upon with scornful eyes as compromising “politicians” – are simply engaged in the fine art of conciliating, balancing and interpreting the forces and factions of public opinion, an art essential to keeping our nation united and enabling our Government to function.

Kennedy concludes that “a fair or poor bill is better than no bill at all, and that only through the give-and-take of compromise will any bill” become law.

Illustrating these points, Kennedy profiles instances of political courage shown by several legislators throughout our history, and the experiences of some mirror what we see in Washington, D.C. today.

For example, in 1807 during his brief sojourn in the Senate, John Quincy Adams defied his party (the Federalists) and his constituents in support of a Republican trade embargo in response to British aggression. As a direct consequence, he lost his Senate seat the next year.

Likewise, during his second term as a Republican Senator, Chuck Hagel questioned his party’s stance on the war in Iraq in 2006, requesting a “phased troop withdrawal,” and in 2007, calling the Iraq surge, “the most dangerous foreign policy blunder in this country since Vietnam.” In 2008, Hagel explained his position:

Each one of us who has a responsibility of helping lead this country needs to reflect on what we think is in the interests of our country, not the interest of our party or our president.

Knowing he would face strong opposition from his own party for his disloyalty, Like Senator Adams before him, Senator Hagel did not run for re-election.

Another pair of politicians that may have shared a similar experience, albeit 160 years apart, are Senator Daniel Webster and Barack Obama. In 1850, Webster gave his famous “Seventh of March” speech in which he set aside his strong Abolitionist beliefs in support of legislation that, at least in his mind, would preserve the Union. Webster was crucified for his support of Henry Clay’s last great compromise and was vilified by those he respected most, including Mann, Longfellow, Emerson, Lowell and Whittier.

Similarly, Barack Obama very controversially discarded his strong opposition to the indefinite detention of suspected terrorists at Guantanamo Bay, and equally strong support for our system of justice, after he became President. In order to, at least in his estimation, ensure the safety and security of the American people, he has repeatedly authorized the killing of individuals without trial, as well as the indefinite detention of those “too dangerous to transfer but not feasible for prosecution.” It is too early to discern the effect on his legacy this will have although many, even on the left, including Michael Moore, Code Pink and the American Civil Liberties Union (ACLU) have expressed disdain and outrage.

Kennedy sums up his analysis of political courage in the end:

I’ll close this article with one of my favorite JFK quotes, coming just shortly before his death, concerning his commitment so securing peace:

What kind of peace do I mean? What kind of peace do we seek? Not a Pax Americana enforced on the world by American weapons of war. Not the peace of the grave or the security of the slave. I am talking about genuine peace, the kind of peace that makes life on earth worth living . . . not merely peace for Americans but peace for all men and women – not merely peace in our time but peace for all time.  For, in the final analysis, our most basic common link is that we all inhabit this small planet. We all breathe the same air. We all cherish our children’s future. And we are all mortal.  June 10, 1963