“Ye” in Names Like “Ye Olde Coffee Shoppe” Should Be Pronounced “The”, Not “Yee” 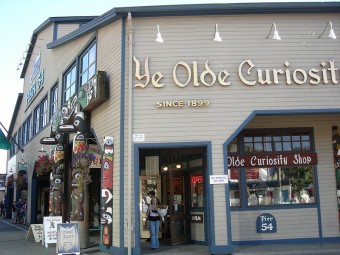 Today I found out the “ye” as in “Ye Olde Coffee Shoppe” should be pronounced “the”.

The “Ye” here is not the “ye” as in “Judge not, that ye (you) be not judged”, but is rather a remnant of the letter “thorn” or “þorn” (Þ, þ).  The letter thorn was used in Old Norse, Old English-Middle English, Gothic, and Icelandic alphabets and is pronounced more or less like the digraph “th”.  As such, this letter gradually died out in most areas (all but Iceland), being replaced by “th”.

Around the 14th century, the use of “th” started to gain in popularity.  At the same time, the way the letter thorn was written gradually changed to look a lot like the letter “Y” instead of “Þ”. Because of this shift in written form of the letter, combined with the advent of the printing press in the 15th century many of which had no letter thorn, printers chose to use the letter “Y” as a substitute for the letter.

This is why you’ll occasionally see in manuscripts from that period things like “yat” or “Yt” for “that” and, of course, “the” abbreviated “Ye” or “ye”. Despite the use of the letter “y” here, it was still understood by readers to be pronounced like thorn or the digraph “th”.

Eventually, all but the “Ye” popularly died out in favor of the respective “th” forms.  Later, even the “ye” went the way of the Dodo bird, excepting being used in the names of trendy sounding old stores the English speaking world over.

Thanks to the Bible, most people are more familiar with the second plural pronoun “ye”, which is pronounced with a “y” sound.  As they are spelled the same, most naturally assume the two words are the same. (Of course, “You Olde Coffee Shop” would be kind of an awkward name for a shop.)

In the end, “ye” as in “Ye Olde Bookstore” is a completely different word using the letter thorn and should just be pronounced exactly like “The”.  This doesn’t sound nearly as archaic, so not exactly what the store owners are likely going for, but that can’t be helped.