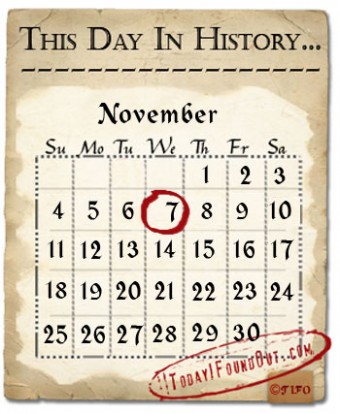 On this day in history, November 7th…

1665 :  One of the oldest surviving newspapers, ‘The London Gazette’ was first published. At that time, King Charles II and the Royal Courts had shifted base from London to Oxford, to avoid the Great Plague. For fear of contagion, no one was willing to touch or read the newspapers from London. Thus, the Gazette was “Published by Authority” of the English journalist Henry Muddiman.  First published on the 7th of November, 1665, the journal was called “The Oxford Gazette”. It was the official journal of record for the British government, in which they printed statutory notices, regulatory, and legal information. Once the plague dissipated, the King returned to London. The publication also moved to the capital city and was subsequently re-named ‘The London Gazette’.  Unlike regular newspapers, the Gazette was not printed for general sale but rather was only sent by post to subscribers. The journal is published every weekday, except for Bank Holidays even today, and claims to be the oldest surviving English newspaper.

1910 : The first Air Freight shipment was undertaken for Max Moorehouse, a department store owner. This flight from Dayton to Columbus, Ohio was mostly a publicity stunt, sponsored by the Moorehouse-Martens Department Store. The pilot, Phil O. Parmalee, carried two bolts of silk on a Wright Model B airplane making it the first commercial transport flight.

1940 : The Tacoma Narrows Bridge nicknamed the “Galloping Gertie”, collapsed in Tacoma, Washington, just 4 months after the bridge’s completion. The half-mile-long suspension bridge linked Tacoma to Gig Harbor, in Washington, the longest man-made span in the US and the third longest in the world at the time. Although the bridge had been designed to withstand winds of up to 120 miles per hour, it was becoming increasingly clear, even during its construction, that there was something seriously wrong with it from an engineering standpoint. A mere breeze would send  ripples up and down its length, so much so, that workers reportedly chewed on lemon wedges to suppress motion sickness from the movement. The workers nicknamed the bridge “Galloping Gertie”, which caught on, especially after motorists felt bridge writhing on windy days. Despite this, the bridge was opened to the public on July 1, 1940 as engineers claimed that a gentle wave motion didn’t put the massive bridge under any structural distress. The overall reaction to this unusual bridge from the toll-paying public indicated that it was disconcerting to drive across the bridge when there was any wind at all, as cars ahead of them bobbed in and out of view.  Many motorists started avoiding the route and the seasickness that came with it altogether, while some sought to take it just for the thrill of the ride. Finally, on the morning of November 7th, with 40 mile-per-hour wind conditions, the bridge’s main span collapsed. Luckily, well not for the dog, but for humans, the only victim of the incident was a black Cocker Spaniel named Tubby. The main cause of the bridges undoing was cited as an aeroelastic flutter, though is commonly mistakenly said to have been from forced resonance (even some older engineering textbooks make this mistake). (Read more in: The Only Victim of the Tacoma Narrows Bridge Collapse was a Three Legged Dog. )

1943 : The Giants and Lions played to a scoreless tie, the lowest scoring NFL (National Football League) game in history. On this day at the Briggs Stadium in Detroit, the Detroit Lions faced off against the New York Giants. Much to the disappointment of the fans of both teams that day, neither team got inside the other team’s 15 yard line. The Giants made it into Detroit territory once in the third quarter, but a pass was  intercepted and returned 31 yards to the Detroit 20. The game ended with a 0 : 0 tie. This was the last scoreless tie in the NFL.

1991 :  Magic Johnson abruptly retires from the NBA, announcing that he is HIV positive. Earvin Johnson Jr., better known as “Magic Johnson” had an illustrious basketball career in the National Basketball Association. He played point guard for the L.A. Lakers from 1979 to 1991, winning  a NBA Finals Most Valuable Player Award in his rookie season and four championships with the team in the 1980s. On this day, he held a press conference announcing that he tested positive for HIV in a physical before the 1991–92 NBA season. He also declared his retirement from the NBA because of the disease. At the time, Johnson was expecting his first child with wife Earlitha “Cookie” Kelly, and confirmed that neither of them had contracted the disease. Initially rumored to be gay or bisexual, Johnson denied the rumors but later acknowledged that he contracted the disease from having multiple sexual partners during his playing career. The announcement caused quite the stir in the news, even making it to ESPN’s 2004 list of most memorable moments in the last 25 years.